Tower-Rock view on the Mississippi 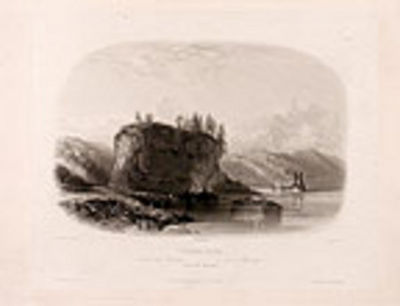 by BODMER, Karl (1809-1893)
Paris, Coblentz and London, 1842. Aquatint engraving by John Outhwaite after Bodmer, on india paper mounted, blindstamp, issue with no date after English imprint, small discreet ink collector's mark on verso. Tear to upper margin not affecting plate area. A rare India proof. Bodmer and Prince Maximilian set out for St.Louis from Mount Vernon on 18 March 1833 making their way rapidly down the River Ohio and joining the Mississippi on 20 March. On the afternoon of 21 March 1833 their steamer approached a feature known as the Grand Tower (or Tower-Rock), which Maximilian described as an isolated drumlike formation between sixty and eighty feet high. He added that `Mr.Bodmer sketched the Grand Tower and found this place highly interesting and picturesque'. The scene includes the traveller's Ohio paddle-steamer and three Mississippi keel-boats, a form of freight transportation that by the 1830s was fast being replaced by the steamers. Karl Bodmer's images show great versatility and technical virtuosity and give us a uniquely accomplished and detailed picture of a previously little understood (and soon to vanish) way of life. Swiss-born Bodmer was engaged by Prince Maximilian zu Wied-Neuwied (1782-1867) specifically to provide a record of his travels in North America, principally among the Plains Indians. In the company of David Dreidoppel (Prince Maximilian's servant and hunting companion), their travels in North America were to last from 1832 to 1834. They arrived in Boston in July 1832, traveled on to Philadelphia, where they stayed with Napoleon Bonaparte's elder brother Joseph. From here they headed west across Pennsylvania across the Alleghenies to Pittsburgh and the Ohio country, visiting all the important German settlements en route. Their most important stop on their route west was at the utopian colony of New Harmony in Indiana. The Prince spent five months there in the company of some of the countries leading scientific men, and studying all the relevant literature on backcountry America. On 24 March 1833 the party reached St. Louis, Missouri, and the start of the journey into Indian country. Graff 4648; Howes M443a; Pilling 2521; Sabin 47014; Wagner-Camp 76:1. (Inventory #: 15603)
$750.00 add to cart or Buy Direct from
Donald A. Heald Rare Books
Share this item
Donald A. Heald Rare Books
Offered by