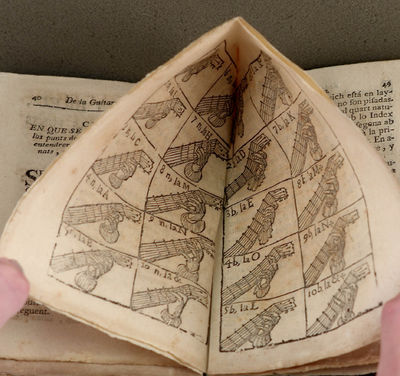 Guitarra espańola, y vandola en dos maneras de guitarra, castellana, y cathalana is a supplement to the first treatise on Spanish Guitar published in Barcelona around 1596(?), first published in 1701 (although that date is doubtful. See below). It is a theory and method book (without music) that provides basic instruction on how to play the Baroque guitar in a rasqueado style. Topics covered include tuning, formation and fingering of chords, and how to accompany popular dances of the day. Notable for its forward-looking concept of harmony, Amat's Guitarra espańola was one of the most influential treatises on the guitar. The 1745 Gerona: Joseph Bró edition is printed in separate sections of Spanish (pp. 3-38) and in Catalan, Tractat Breu (pp. 39-56). The book (bearing early chord and hand position illustrations) revises and simplifies the original edition 16th century edition.

The author Joan Carles Amat [Carles y Amat, Joan] (b. Monistrol de Montserrat, ca. 1572; d Monistrol de Montserrat, 10 Feb 1642) was a Catalan theorist, musician, and physician. Biographical information about Amat is drawn mainly from research carried out in 1918 by José Vilar (Revista Ilustrada Jorba [1925] and Pujol [1950]). Amat became municipal physician at Monistrol in 1618, performed a similar function at the nearby monastery of Montserrat, and occupied several other municipal offices. At the time of his death, he had just started a term as mayor.

The published history of the editions is confusing: The original treatise Guitarra espańola y vandola en dos maneras de guitarra castellana y valenciana de cinco ordines was probably published in 1596, although the earliest edition we have bears a 1626 imprint (Lérida: Anglada & Llorens). According to Grove, In the eighteenth century the 1596 edition treatise was combined with a supplement entitled Tractat breu, y explicacio dels punts de la guitarra, comprising five chapters, in Catalan or Valencian depending on the place of printing. The earliest surviving edition with this supplement is dated 1701 and published by Gabriel Brň when the Brň family was located in Barcelona (see copy in BNE M.FOLL/422/11 1000524539). The Valencian imprint found in the BNE is published by Agustin Laborda, 1758.

Certainly in error are the four OCLC locations (19930629) for a 1639 Gerona: Bró edition of Guitarra espańola, y vandola en dos maneras de guitarra, castellana, y cathalana. Only 52 entries in OCLC show Gerona printing before 1650, most of them by Gaspar Garrich. On the other hand, over 20 records exist in the middle of the 18th century for books published in Gerona by the Bró family with the given names of Jayme, J. Joseph, Gabriel, Jaume, and Francisco. A rare imprint. Gerona (Girona) is a lovely Roman era village 100 kilometers north and east of Barcelona. It had few printers in the 17th and early 18th centuries. References: Anglés y Subirá, vol. III: no. 109; RISM B/VI/1: p. 84; OCLC: Yale, OSU (Facsimile). (Inventory #: 1180)
$4,000.00 add to cart Available from Golden Legend
Share this item
Golden Legend, Inc.
Offered by