[Album of Photographs from a Cruise to Aruba and Venezuela] 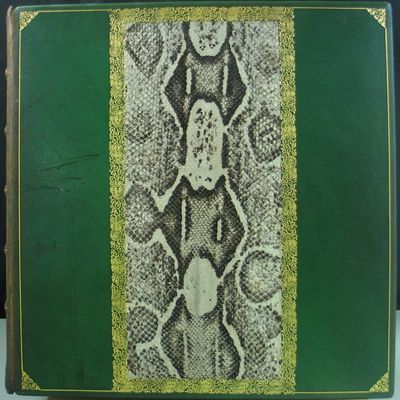 An exquisitely bound album chronicling a cruise to Aruba and Venezuela on the Grace Line from November 5-22, 1954. The album was assembled by Mr. Charles W. Holton, former mayor of Essex Falls, NJ (1930-1951) who was traveling aboard with a party of seven. Holton was, among other things, an amateur photographer of considerable skill, and filled this elaborate album with 154 nearly full-page silver gelatin photographs taken on the cruise; these are neatly laid on to album leaves, with the majority captioned. According to the log, the ship departed form New York and went straight to Aruba. The larger portion of the trip was dedicated to Venezuela. Each segment of the trip is represented in photographs, with the subjects varying from landmarks and straw markets to shanty towns and the more elegant parts of Maracaibo. But these are no mere tourist snapshots. Holton brings a keen documentary eye to his subjects and the images are well-selected, framed, and printed. Indeed, this is among the most impressive travel albums we've encountered. A particularly strong representation of images of indigenous women and children runs throughout the album. The album also includes a 7 page travel narrative, trip log, as well as pamphlets, stamps, currency, ephemera from the cruise line tipped in. We locate one of Holton's albums on the Florida Keys held at the George A. Smathers Library at the University of Florida, and another album from a trip to the Caribbean held at the University of Miami. A compelling collection of post-WWII photographs with tremendous research value (as well as display appeal) that successfully occupies the border between the vernacular and the professional. (Inventory #: 13652)
$2,500.00 add to cart or Buy Direct from
Brian Cassidy Bookseller @ TPM
Share this item

[Grindstone City, MI] : [The Alternative Press] , [1983]
(click for more details about REMEMBERED POEM)
View all from this seller>