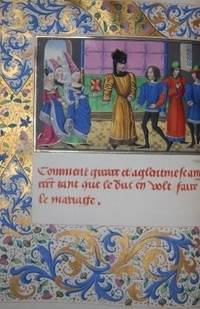 by Montreuil, Gibert. Edited by Francisque Michel
Paris: Chez Silvestre, 1834. First Limited Edition Thus. Full Calf, with Blindstamping, Gilt Decoration, etc.. Fine. Eight spectacular hand-colored and illuminated plates on vellum. No. 20 of a limited edition of 200 total, and one of 15 copies on Hollande paper. 8vo. 22.5 by 15 cm, 9 by 6 inches. lxiv, [4 leaves], 334, [2] pp. Each of the plates is accompanied by a plain black and white lithographic version. The hand-colored versions easily pass for actual illuminated paintings, and indeed, the hand-colorist did not merely fill in color but also made some subtle changes to the illustration so that the hand-colored version does not match exactly the black and white one. The illumination on the vellum is of an uncommon precision and beauty so as to read as tantamount to manuscript, and the work is unquestionably superior to what one would find in the better works of Henry Shaw, who contemporaneously was producing important books on the topic of illuminated manuscripts. The "Roman de la Violette" is based on the same story as Shakespeare's "Cymbeline". The binding of this copy is an exquisite example of French blindstamped leather of the period, with Greek-style ornament in the large centerpiece of the boards and a Gothic ornamental diaper impressed onto the spine, which also has raised bands. The binding has a few dings and tiny pinprick losses, and the joints have a slight goopiness of a earlier restoration, but the binding still comes off as very handsome. The volume itself fits into a custom slipcase with leather fringe and a wide ribbon pull. This copy had once belonged to the Ermitage in St. Petersburg. (Inventory #: 002865)
$4,000.00 add to cart Available from
White Fox Rare Books & Antiques
Share this item
White Fox Rare Books and Antiques
Offered by