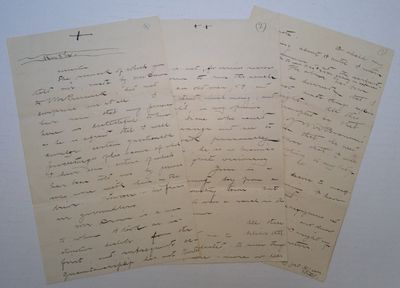 by [NEW MEXICO TERRITORY]
Alamo Hueco, 1886. unbound. Fine collection of two handwritten letters by a ranch-hand describing the hardships of trying to survive on a New Mexico Territory prairie, at Alamo Hueco - via Hachita, in 1886. One letter is dated Sept. 3rd. The second is undated, but was apparently mailed around the same time, 8vo, 12 pages, in very small part: "...We heard six shots fired a few hundred yards below the troughs. Five of us shouldered our guns...we found it was Jesse, nearly dead from thirst and exhaustion. Chuck and he started a few days previous to a ranch 45 miles distant [going] after their head of cattle. They found them and stated back, camping on the prairie. Their horses broke away and they started after them at day-break...following them for six miles...but they would not get near enough to catch them. They were so far from their saddles, canteens, and provisions that they decided to strike out for Alamo Hueco - 20 miles distant. The day was very hot and they were able to get water only twice. Chuck gave completely out about a few miles from the ranch and I had to saddle a horse, take some water, and go out and find him. He was the sorriest looking object...One of their horses got caught in the bushes and was for 3 1/2 days without food or water - Jess and I, after two days search, found him 8 miles from home, nearly dead. Yesterday a teamster brought in some flour, bacon and beans - and today the Govt. wagon came in." Additional content includes allegations of corruption at the ranch, wages paid to a supervisor who rarely works, and rivalries among the workers. Excellent condition. (Inventory #: 245848)
$300.00 add to cart or Buy Direct from
Argosy Book Store
Share this item

Map of Valuable Building Lots in the Village of Astoria; and the town of Newtown, Queens Co. L. I.

New York : Perkins Sun Litho Establishment , 1851
(click for more details about Map of Valuable Building Lots in the Village of Astoria; and the town of Newtown, Queens Co. L. I.)