HISTORICAL SCRIPTS FROM CLASSICAL TIMES TO THE RENAISSANCE 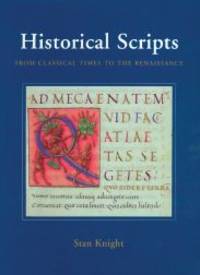 by Stan Knight
New Castle, Delaware: Oak Knoll Press and John Neal, Bookseller, 2009. hardcover, dust jacket. Calligraphy. 4to. hardcover, dust jacket. 112 pages. Reprint with minor corrections of second edition. The craft of calligraphy has a 2000-year history in the Western world. Up to the time of the Renaissance, calligraphy was the only means of preserving literature, and so, it played a vital role in the spread of learning, culture, and religion. Historical scripts were not rigidly-fixed "styles;" they represented the high peaks in an endlessly shifting landscape. Throughout centuries, styles of writing were continually being modified and developed in response to a multitude of influences encompassing political, religious, aesthetic, intellectual, sociological, and pragmatic changes in the ways that books were made and scripts were written. The modern calligrapher, typographer, historian, and anyone interested in western lettering and documents benefits from studying the methods, skills, and attitudes of generations of historical scribes who produced such outstanding and accomplished works for so many centuries. Revised and expanded, this book is an excellent survey of bookhands with its full-page, enlarged illustrations and solidly researched sources. It is a useful text for studying the history of manuscripts as well as the details of letter construction. This work also helps one make judgments about the technical condition of letter writing and its qualities of rhythm and movement, possible only when consulting an original manuscript. The author has gone to considerable lengths to obtain photographs that are well-focused and lit so that the tactile qualities of surfaces, ink tone, and flow are revealed. The author has chosen examples of formal writing that show a coherent and reasonably consistent relationship between methods of tool use and letter formation, making the construction of a script much easier to grasp in practice. He has also made the effort of selecting writing without idiosyncrasies of style. (Inventory #: 52752)
$39.95 add to cart or Buy Direct from Oak Knoll Books
Share this item