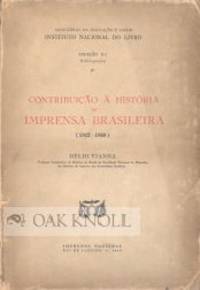 by Vianna, Helio
Rio de Janeiro: Imprensa Nacional, 1945. sewn, stiff paper wrappers. Brazil. 8vo. sewn, stiff paper wrappers. 664 pages with 6 additional pages and 48 additional leaves of plates. Approximately ninety Brazilian periodicals, mostly for news and politics, along with selected pamphlets, in the context of Brazilian political history, 1812-1869. Not a bibliography or periodical index with standard, systematic entries, but rather a biblio-documentary, for which reason (probably) Besterman does not list it. Sections relating to individual publications do not follow a set scheme, but offer some combination of background information, biographies of publishers and/or editors, publishing histories, summaries of and quotations from contents, and other material. The majority of periodicals follow in the order of a general political chronology, but the organizing principle (in a separate section) for some periodicals, along with the pamphlets, is the publisher/ writer/editor. There is no list of pamphlets. There are sixty-four illustrations of first issues, pages, publishers, etc. With an alphabetical index, list of illustrations, and an index of periodicals "studied and cited." Binding loose, starting to separate between p.142 and the following plate. Covers soiled, worn, chipped. General browning, except for plates. (Inventory #: 51878)
$150.00 add to cart or Buy Direct from Oak Knoll Books
Share this item