FROM FLOCK BEDS TO PROFESSIONALISM: A HISTORY OF INDEX-MAKERS 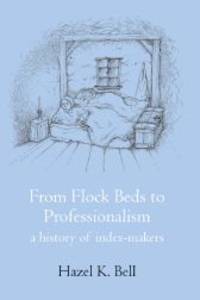 by Bell, Hazel K.
New Castle, Delaware and Hatfield, Hertfordshire: Oak Knoll Press and HKB Press, 2008. Hardcover, dust jacket. 6 x 9 inches. Hardcover, dust jacket. 348 pages. With a Preface by David Crystal. First edition. "Indexing is an anonymous profession. An index may be praised or blamed, but rarely is the indexer named, lauded or shamed," laments Professor David Crystal in his preface to From Flock Beds to Professionalism. This book, however, initiates a change. Hazel Bell presents here brief biographies of 65 individual practitioners, the makers of indexes, from the fifteenth to the twentieth century, considering their working methods, techniques, training, remuneration, their lives and their personalities. Crystal observes, "Although it is the history of indexing which governs the structure of the book, it is the personalities of the indexers themselves which shine through it ... I was unprepared for the range, diversity and sheer brilliance of the personalities lying behind the names." After the biographical section on the "Lone Workers," Bell outlines in "Banding Together" the history of groups and societies of indexers world-wide up to 1995, the year she sees as entailing the end of print-only indexing. The book includes photographs of indexers and of their tokens of recognition. Hazel Bell has been a freelance indexer since 1964, having compiled to date more than 700 indexes to books and journals, and won the Wheatley Medal for an outstanding index in both 2005 and 2006. She has been a member of the Society of Indexers for 44 years, serving on its Council as editor of its journal, The Indexer, for 18 of them. In 1997, she was presented by the Society with the Carey Award for services to indexing. She has written many articles for The Indexer and other learned journals. Bell is the author of Indexers and Indexes in Fact and Fiction (British Library/University of Toronto Press, 2001) and Indexing Biographies and Other Stories of Human Lives (Society of Indexers, 3rd edition 2004). Co-published with HKB Press. Sales rights: Worldwide except in the UK; available in the UK from HKB Press. (Inventory #: 96599)
$95.00 add to cart or Buy Direct from Oak Knoll Books
Share this item