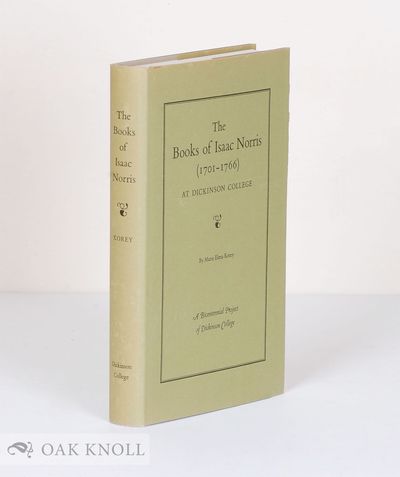 by Korey, Marie Elena
Carlisle, Pennsylvania: Dickinson College, 1976. cloth, dust jacket. Norris, Isaac. 6 x 9.25 inches. cloth, dust jacket. 316 pages. First edition. In 1784, John Dickinson presented books selected from the library of his father-in-law, Isaac Norris, to Dickinson College. These books, which became the foundation of the College's library, represent a substantial portion of Isaac Norris's own collection. This gift, a collection of 1,902 titles and 1,705 volumes, contains a small number of theological works in English, and classic works in Latin, French, Greek, German, Italian, and Dutch. Eight of the titles include those by Aristotle, eight by Cicero, copies of Euripides, Virgil, Terence, Tacitus, and Suetonius, Ovid's AMATORIA, Thucydides in a French edition, but no Horace. The gift also contained innumerable works on Socianism, Jansenism, quietism, and other religious movements. There is also a rich body of 17th-century material as well as medical and scientific works. There is no contemporary list of John Dickinson's gift of 1784 nor is there any known catalogue of Norris's entire collection. Illustrated with six plates. Printed by the Stinehour Press. (Inventory #: 50392)
$25.00 add to cart or Buy Direct from Oak Knoll Books
Share this item

WINTER RACE ON LAKE CAYUGA: A TALE OF OLD AURORA.|THE

n.p. : (Press of Robert LoMascolo , 2013
(click for more details about SQUIRREL'S SUNFLOWER)
View all from this seller>