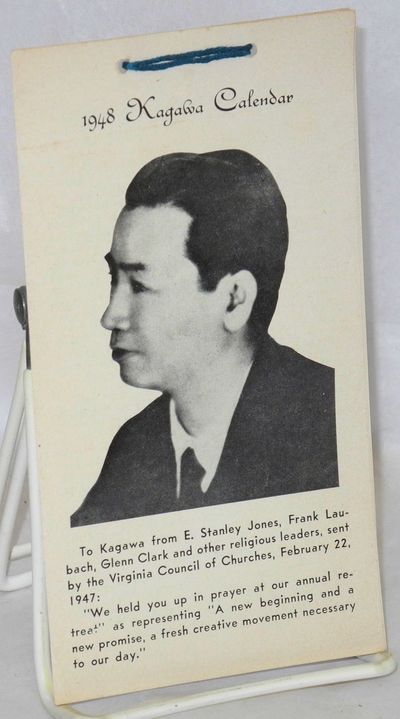 by [Kagawa, Toyohiko]
Oakland: Committee on Education and Relief for Japan, 1947. Paperback. [16p.], bound with blue thread, portrait of Kagawa on front panel. Calendar booklet with text on each page about Kagawa Toyohiko's brilliant leadership, pacifist and anti-communist activities, etc. First panel describes him as single-handedly stopping a mob of strikers from destroying a dock yard thanks to the persuasive power granted by God. On another page he compares capitalists to steam engines and cooperatives to electric motors. "You were all right in your day, but it is past." Kagawa was a labor activist and missionary, jailed several times for labor activities as well as for apologizing to China for Japan's occupation in 1940. He was nominated for the Nobel Prize in Literature in 1947 and 1948, and the Nobel Peace Prize in 1954 and 1955. (Inventory #: 182917)
$45.00 add to cart or Buy Direct from Bolerium Books
Share this item