THE BOOK OF COMMON PRAYER. [bound with] STRENHOLD, THOMAS and JOHN HOPKINS. THE WHOLE BOOK OF PSALMS COLLECTED INTO ENGLISH METRE 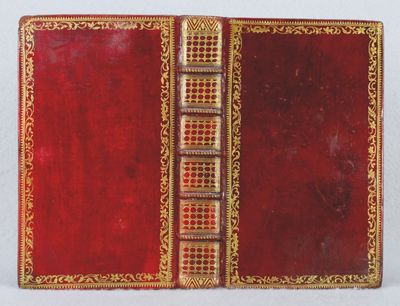 by (BASKERVILLE IMPRINT)
Cambridge: J. Baskerville and B. Dod, 1762; Birmingham: John Baskerville, 1762. 171 x 105 mm. (6 3/4 x 4 1/8"). [198], [61] leaves. VERY PRETTY CONTEMPORARY CLARET MOROCCO, ELEGANTLY GILT, covers framed with dogtooth roll and fillet border enclosing floral roll, raised bands, spine gilt in compartments with repeating rows of a small tool creating a lattice effect, gilt turn-ins, marbled endpapers, all edges gilt. Cancellans title page with lozenge-and-star printed slip pasted over price at foot of page. Front flyleaf with stenciled ownership: "Hannah Hill / her Book / January 5 / 1775." Gaskell 20, 21; Griffiths, p. 179, no. 8. Three darkened patches and a scattering of tiny worm tracks on upper cover, corners a bit mashed, occasional mild foxing or minor marginal stains, but generally a fine copy, the text fresh and clean, and in a lustrous binding with no significant wear. This is a very attractively bound copy of the fourth and final Baskerville edition of the Book of Common Prayer, and the only one issued in duodecimo format. The Sternhold and Hopkins Psalter, printed the same year and on the same paper, makes a suitable companion. Baskerville (1706-75) began his career as a writing master, then moved on to cutting letters for gravestones. He patented a process for "japanning," a type of veneer that replicated the popular Japanese lacquer work, and ran a successful business in this manufacture for 10 years before following his desire to cut type and print books. In the preface to his Milton (1758), he explained, "Amongst the several mechanic Arts that have engaged my attention, there is no one which I have pursued with so much steadiness and pleasure, as that of Letter-Founding. Having been an early admirer of the beauty of Letters, I became insensibly desirous of contributing to the perfection of them. I formed to my self Ideas of greater accuracy than had yet appeared, and have endeavoured to produce a Sett of Types according to what I conceived to be their true proportion." In addition to innovations in cutting type and making paper, Baskerville was responsible for improvements to printing presses, ink, and paper treatment. The elegant and feminine binding may have been done for Hannah Hill, whose name appears on the flyleaf. It certainly would have made an agreeable accessory for a young lady to carry to church. (Inventory #: ST12473)
$1,456.00 add to cart or Buy Direct from
Phillip J. Pirages Fine Books
Share this item