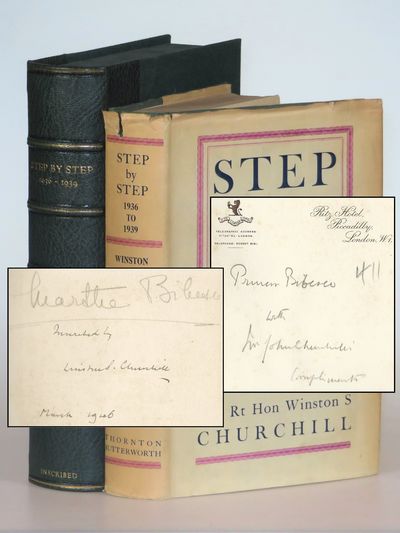 by Winston S. Churchill
London: Thornton Butterworth Limited, 1939. First edition, first printing. Hardcover. This remarkable inscribed first edition features a three-way association between Winston S. Churchill, his longtime friend, the influential and colorful Romanian Princess Marthe Bibesco, and Winston Churchill's brother, John Strange "Jack" Spencer-Churchill. Winston Churchill's inscription appears on the ffep in three lines and reads "Inscribed by / Winston S. Churchill / March 1946". Bibesco's distinctive signature appears directly above Churchill's inscription in pencil and reads "Marthe Bibesco". The pastedown (opposing the ffep) bears a personal note from Jack Churchill on the stationery of The Ritz Hotel, Piccadilly, London. Written in pencil in 4 lines it reads: "Princess Bibesco / with / Mr. John Churchill's / Compliments". The number "411" also appears on the note; we can only speculate about the meaning, which may refer to a room number. It is not certain that the note was hand written by Jack Churchill, but this seems quite plausible given that Jack was then a prosperous London resident and Bibesco was living at The Ritz Hotel in Paris. A reasonable assumption is that Jack sent the book to Bibesco at The Ritz in Paris via The Ritz in London. Bibesco first met Churchill in April 1914 at a dinner party with French politicians on the eve of the First World War. They would become and remain friends until Churchill's death more than half a century later. Bibesco was highly educated, beautiful, exotic, engaging, and a prolific author. She spent her long life moving comfortably in the circles of Europe's royal, political, social, and intellectual elite. She was friend, confidante, and sometimes intimate of European monarchs and prime ministers. She knew not only Winston, but also members of his family, counting among her more intimate friends Churchill's aunt, Leonie Jerome. Bibesco would write a book about Churchill (Winston S. Churchill: Master of Courage), published 10 years after she received this inscribed copy of Step By Step. Twelve years his junior, Bibesco would outlive Churchill, dying at age 87 in 1973. John "Jack" Churchill was the younger brother of Winston. Jack and Winston were close. Jack served in the South African Light Horse alongside his war correspondent brother in the Boer War between 1899 and 1900 and later fought with distinction in the First World War. Reaching the rank of Major, he was awarded the Croix de Guerre and the Légion d'Honneur, as well as the British Distinguished Service Order. Jack became a successful businessman in London. During the Second World War, when Jack's house was destroyed in the Blitz, he lived at 10 Downing Street. Jack would die of heart disease in 1947, one year after this book was presented with his compliments to Princess Bibesco. Step By Step, Churchill's last book published before the outbreak of the Second World War, includes 82 newspaper articles focused on foreign affairs written by Churchill at the end of his "wilderness years" between March 1936 and May 1939. Many of them of course contain his warnings and predictions about Nazi Germany. The book is emblematic of the courage Bibesco would later profile in her book about Churchill - in particular, what she called "courage to displease others and defy their opinions" (Winston Churchill: Master of Courage, Hale, London, 1957, p.10). This inscribed copy is a first edition, first printing in very good condition in a supplied very good minus first printing dust jacket. The green cloth binding shows only light scuffing. Given Princess Bibesco's intellect and education, it seems quite plausible that it was actually read by her. The contents remain clean and tight. Light soiling is confined to the text block edges. The book is preserved in a dark green quarter goatskin clamshell case lined with archival paper and featuring rounded spine with raised, gilt-ruled bands. Bibliographic reference: Cohen A111.1.a, Woods/ICS A45(a.1), Langworth p.197 (Inventory #: 001072)
$8,925.00 add to cart or Buy Direct from
Share this item