THE WORLD'S DOUBLE: BEING A TALE OF TWO PLANETS .. 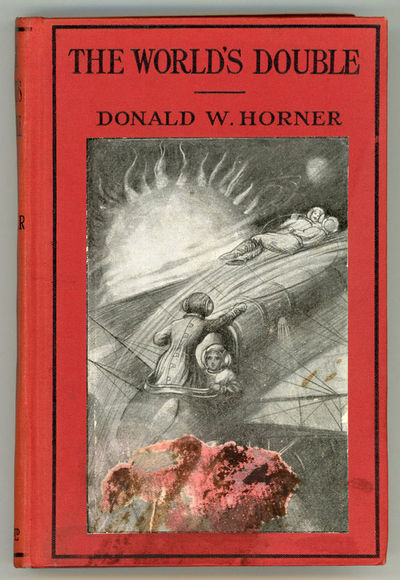 by Horner, Donald W[illiam]
London: Simpkin, 1913. Octavo, pp. [1-8] [1] 2-243 [244: blank], inserted frontispiece with illustration by Mabel Spurrier, original red cloth, front and spine panels stamped in black, pictorial paper onlay affixed to front cover. Second edition, revised. Presentation copy inscribed "With the Author's Compliments" at the top edge of the title page. The "cheap edition" of Horner's second interplanetary novel, first published in 1912 as THEIR WINGED DESTINY: A TALE OF TWO PLANETS. The binder's cloth used for this printing is of a slightly lesser grade than that used on first printing copies, otherwise the two are quite similar. This second printing is of interest because Horner has revised the ending of the novel, signature "Q" is revised and signature "R" (pages 241-[244]) is added. Additionally, the picture pasted to the front cover is not a reproduction of the frontispiece (as was the paper pictorial pasted on first printing copies) but is a different illustration (not included in first printing copies) which depicts the protagonists in space suits aboard their spacecraft observing the rogue star approaching the earth behind them. Boys' adventure story in which "a spacecraft leaves earth (threatened with destruction by a dark star) to fly to Alpha Centaurus, passing an ultra-Neptunian planet with primitive life form identical to those on Venus before settling down on a world exactly like Earth, even down to individuals that the protagonists recognize. A companion volume to BY AEROPLANE TO THE SUN (1910), using the background of Venusian life already described in the earlier novel." - Locke, Voyages in Space 111. Clarke, Tale of the Future (1978), p. 41. Clute and Nicholls (eds), The Encyclopedia of Science Fiction, p. 585. Locke, A Spectrum of Fantasy, p. 117. Bleiler (1978), p. 103. Reginald 07409. Ballooning bookplate of Richard Booth affixed to front paste-down. Endpapers foxed, endpapers and text block tanned (latter less than is usually the case; text is printed on cheap wood pulp paper stock and toning is inevitable), stain to front cover and abrasion to the pictorial paste-on, a good copy. Both printings of this book are uncommon. (#148789) (Inventory #: 148789)
$250.00 add to cart or Buy Direct from L.W. Currey
Share this item
L.W. Currey Inc.
Offered by