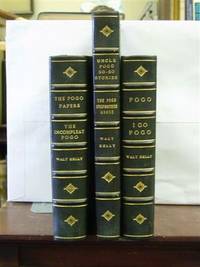 by Kelly, Walt
New York: Simon & Schuster, 1951. Three volumes in three quarter green morocco with marbled boards and matching end papers. 5 raised bands with gilt titling and ornamentation. 2 vols. octavo and 1 quarto. Contains the following titles: Pogo, I Go Pogo, The Pogo Papers, The Incompleat Pogo, Uncle Pogo So-So Stories, and The Pogo Stepmother Goose. Front free endpapers of each volume are inscribed with Pogo drawing and signature of Walt Kelly. The quarto volume contains an explanation by the incribee's brother of the biblio background of these volumes of which only 2 sets exist.. Inscribed By the Author. First Thus Various Printings. Three-Quarter Leather. Near Fine/No Jacket. Illus. by Author. 8vo - over 7¾" - 9¾" tall. Trade. (Inventory #: WN41164)
$1,300.00 add to cart Available from Title Page
Share this item
The Title Page
Offered by

Specializing in scholarly, non-fiction, literature and the other arts.

Accept returns with satisfactory reason and state of book as mailed.
More from this seller

by Michener, James A

The Thyssen-Bornemisza Collection of Modern Paintings

Florence : Vallecchi Editore , 1974
(click for more details about The Thyssen-Bornemisza Collection of Modern Paintings)
View all from this seller>