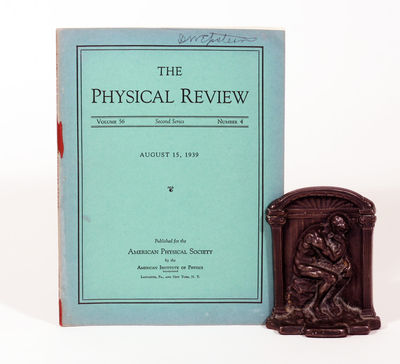 by FEYNMAN, RICHARD
Lancaster and New York: American Physical Society. 1st Edition. Soft cover. Very Good. FIRST EDITION of Feynman's undergraduate thesis at MIT, "a fundamental discovery" published in The Physical Review when he was just twenty-one. "Forces or energy-that was the choice for those seeking to apply the quantum understanding of the atom to the workings of real materials. At stake was not mere terminology but a root decision about how to conceive of a problem and how to proceed in calculating...   "As Feynman conceived the structure of molecules, forces were the natural ingredients. He saw springlike bonds with varying stiffness, atoms attracting and repelling one another. The usual energy-accounting methods seemed secondhand and euphemistic... [He demonstrated that] the force on an atom's nucleus is no more or less than the electrical force from the surrounding field of charged electrons-the electrostatic force. Once the distribution of charge has been calculated quantum mechanically, then from that point forward quantum mechanics disappears from the picture. The problem becomes classical; the nuclei can be treated as static points of mass and charge. Feynman's approach applies to all chemical bonds" (Gleick). His discovery, now known as Feynman's theorem or the Feynman-Hellmann theorem, has endured as an efficient approach to the calculation of forces in molecules. Provenance: With ownership signature of D.W. Epstein on front cover; presumably the D.W. Epstein who, along with I.G. Mallof developed the electron gun in 1934. IN: The Physical Review, Vol 56, Second Series, Number 4, August 15, 1939. Lancaster, PA and New York, NY: American Physical Society, 1939. Quarto, original wrappers. Toning around edges of wrappers, red paint marks on spine extending into front wrapper. Rare in original wrappers. Note: A custom cloth box is available for this item for an additional $225. (Inventory #: 1300)
$1,750.00 add to cart or Buy Direct from
Manhattan Rare Book Company
Share this item