[Original Manuscripts for:] "Q. E. D.," "CIRCUMSTANTIAL," and "A PAIR OF BLUE SHOES AND THE ODD ROAD A GIRL TRAVELLED TO GET INTO THEM." 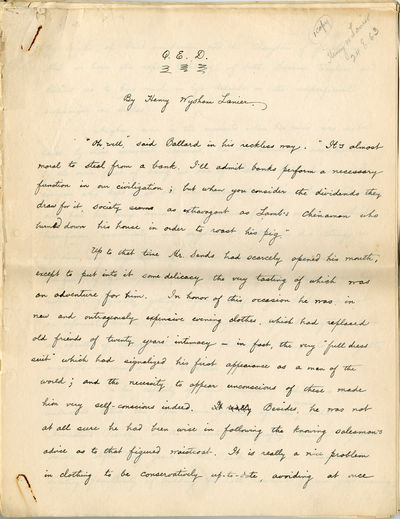 by Lanier, Henry Wysham
24 East 63rd St, New York, nd. 39; 50; and [1],86 leaves respectively. Quarto. First two autograph manuscript, third carbon typescript, on rectos only. Some modest dust-soiling, title leaf of typescript a bit torn and ragged, but generally good. Three long short stories by the son of the poet, founding editor of THE GOLDEN BOOK, biographer and occasional New York historian. The autograph manuscripts bear occasional minor corrections and revisions, but are comparatively clean. Lanier engaged in a broad range of writing activities, including editing his father's papers, publishing a biography of A.B. Frost, and contributing the text to Berenice Abbott's GREENWICH VILLAGE. His reputation remains that of a professional man of letters rather than a fiction writer of significant accomplishment. (Inventory #: WRCLIT53751)
$300.00 add to cart or Buy Direct from
William Reese Co. - Literature
Share this item