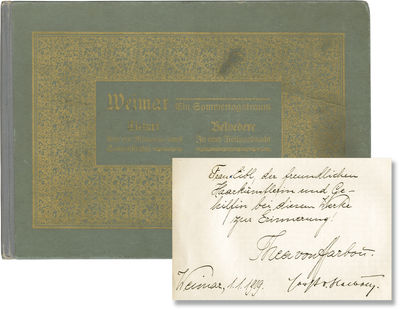 A poetic romance, illustrated throughout with photographs, depicting the languid posturing of the young von Harbous and their friends. The players are dressed in 19th century costumes, as they lounge by statues and fountains, pose in ruins and veranda, punt among swans and take tea in rose gardens, all against the picturesque backdrops of Weimar Park, Tiefurt House, and the Schloss Belvedere.

The von Harbou siblings' playful luxuriating in Weimar's pleasure gardens is very much in keeping with their Prussian aristocratic upbringing, but runs markedly and interestingly against the political seriousness of Thea's later work, almost entirely a rebellion against the privilege of her youth.

The Lady Vanishes (Original photograph from the 1938 film)

Frenzy (Original photograph from the 1972 film)

Universal City : Universal Pictures , 1972
(click for more details about Frenzy (Original photograph from the 1972 film))
View all from this seller>