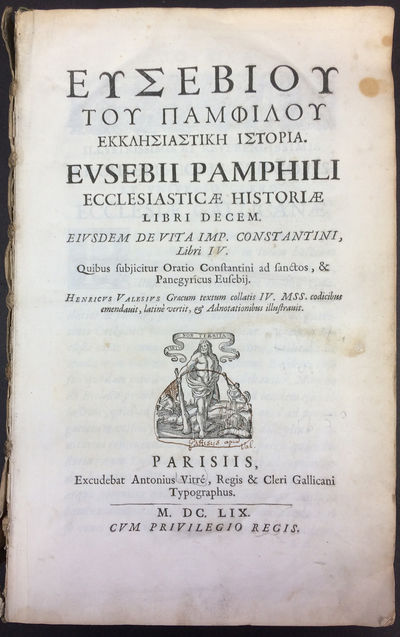 by Eusebius Pamphili (or Pamphilius). Bishop of Caesarea; Valois, Henri de
Parisiis [Paris]: Excudebat Antonius Vitre, 1659. First edition, thus. Vellum blind stamped with device and rules, raised bands. Spine curled and partially detached at the bottom, boards soiled and worn, front board, endpaper, first blank, and half-title loose, a few notations to title page and occasionally in text, some light scattered foxing, small chips to the lower corners of three leaves not affecting text, otherwise quite clean.. [4], [48], 14, 665, [12], 320, [7] pp. Engraved device on title page, engraved initial letters and head pieces. Folio (33 cm). [Title also in Greek: Eysebioy toy Pamfiloy Ekklesiastike istoria]. Collation: a'4 e'4 i'4 o'4 u'4 aa4 ee2 *4 **4, A-Pppp4, Qqqq2, a-rr4, ss2, t1, Rrrr1. Folio. (14 3/8 x 9 inches). Double columns in Greek and Latin. Eusebius, bishop of Caesarea (b.260-70), and contemporary with Constantine the Great, is rightly called the Father of Church History. "The position of Eusebius, at the close of the period of persecution, and in the opening of the period of the imperial establishment of Christianity, and his employment of many ancient documents, some of which have since been lost, give these works a peculiar value" (CE). The work was later added to by others including Socrates, Sozomen, Theodoret, and Evagrius. The best and most important edition is that of Henri de Valois (Valesius) who published his first edition of the Greek text, with a new Latin translation and with copious critical and explanatory notes at Paris in 1659, which also included Eusebius' Vita Constantini (the remainder of the collection of the early Greek historians of the Church was published in two subsequent folio volumes ending in 1673). "For the elucidation of Eusebius' History we owe more to Valesius than to any other man. His edition of the text was an immense advance upon that of Stephanus, and has formed the basis of all subsequent editions, while his notes are a perfect storehouse of information from which all annotators of Eusebius have extensively drawn. Migne's edition (Opera, II 45-906) is a reprint of Valesius' edition of 1659" (Schaff, Post-Nicene Fathers, 98). ABPC shows only one copy has come up at auction in the last 40 years, at Quaritch in 1984. Institutional bookplate on the free front endpaper noting the book was a gift of Michael J. O'Farrell, the first Bishop of the Diocese of Trenton, with his bookplate on the half title. Brunet 1110. (Inventory #: 26670)
$500.00 add to cart or Buy Direct from
Kaaterskill Books
Share this item

Augusta House [Augusta, ME] 1855
(click for more details about [ALS] Maine House Member M.M. Rawson Reports to Gubernatorial Candidate on Corruption in the Vote for Governor)

New York : Theatre Francais , 1867
(click for more details about Marie Antoinette. A Drama in a Prologue, Five Acts, and Epilogue. Written Expressly for Madame Adelaide Ristori... As originally produced in New York City by Madame Adelaide Ristori and her Dramatic Company, under the Management of J. Grau)
View all from this seller>