MARDI: AND A VOYAGE THITHER 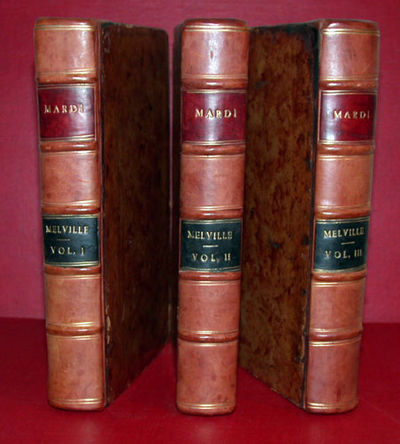 by Melville, Herman
London: Richard Bentley, 1849. Three volumes. Octavo. Mottled 18th century calf (yes, 18th century!), neatly and sturdily rebacked at a recent date in matching calf, with raised bands, gilt rules, contrasting red and black gilt labels, new endsheets. Boards somewhat worn and darkened at edges, else a very good set, with the half- title in the third volume, but not the second (none called for in the first). The second and third volumes are largely unopened. First edition, preceding the U.S. edition. One of one thousand sets printed. Apart from THE WHALE, Melville's only other three volume novel. In any state, even in an English provincial remboitage such as this, it is uncommon. SADLEIR (EXCURSIONS), p.225. BAL 13657. (Inventory #: WRCLIT42255)
$6,250.00 add to cart or Buy Direct from
William Reese Co. - Literature
Share this item