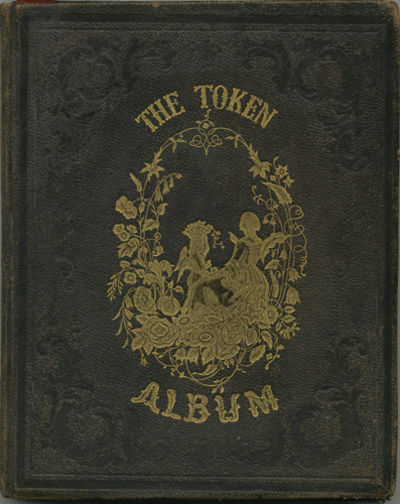 by [Riker, John C.]. Keniston, Hannah E.
New York: John C. Riker, 1894. First edition. Pebbled brown morocco, illustrated in gilt, stamped in blind, all edges gilt. A very good copy with minor edgeworn to boards, a few leaves with foxing, endpapers just browning.. 50 lvs, some colored, plus plates. Illus. 5 engraved plates, plus 1 hand color drawing and 3 color stickers. Sm. 8vo. Album of mostly friendship poems to Hannah E. Keniston Hanaford (1834-1895) of Gilmanton, New Hampshire. 36 entries, one sketch, from 1854 to 1894, a year before her death, by friends in the towns of Gilmanton (including the Gilmanton Academy), Campton, Plymouth, Rumney, Holderness, Exeter, and Ashland. "The tradition of keeping autograph albums came to America from Europe in the 1820s, gaining popularity throughout the nineteenth century.... Although no documentary evidence of the production and marketing of albums has come to light, it seems clear that commercial publishers probably found them a convenient way to use up various materials left over from other jobs, such as colored papers and illustrated plates. Albums were generally bound quite elaborately in cloth or leather, often embossed or stamped in gold, and demonstrate the superb craftsmanship of the nineteenth-century bookbinder.... One of the more prolific nineteenth-century album producers was commercial publisher John C. Riker of New York, whose imprint may be found in almost half of the items in the [American Antiquarian] Society's collection," Carol Fisher-Crosby, American Antiquarian Society. John C. Riker is first listed in New York directories for 1827. (Inventory #: 41771)
$275.00 add to cart or Buy Direct from
Kaaterskill Books
Share this item

1. All orders are subject to prior sale. To order call, fax, email, or use online order screen. 2. Books are in very good condition unless otherwise noted. 3. Books may be returned in original condition for any reason within 30 days. It is helpful if you notify us first so your refund can be processed promptly. 4. Payment can be by check, money order, bank transfer, or American Express, Mastercard, and Visa charge cards, or Paypal. Foreign orders should be in U.S. funds drawn on a U.S. bank. 5. New York residents will be billed appropriate sales tax (unless a tax id number is provided); if paying by check please add the proper amount. 6. Libraries and Institutions can be billed according to their needs. 7. All items are shipped boxed. For domestic orders books are normally shipped USPS media unless another method is specified; shipping and handling is $5.00 for the first book and $1.50 for each additional volume, media rate. For Priority Mail, add $4.50 for the first volume. For Express Mail or other needs, please contact us. 8. FOR INTERNATIONAL ORDERS, shipping and handling is calculated individually in order to insure the most economical rate. Posted rates on this site are based on the average book. Some books can be shipped for less. 9. Large or extra heavy books and sets may incur an additional fee. 10. All items are shipped insured by us at no additional charge.
More from this seller

Catalogue 21. Judaica and Hebraica From the Libraries of the Late Dr. A. Büchler, Dr. Robert Eisler, Prof. Dr. Samuel Krauss, Prof. Scheftelowitz, and others

by A. Rosenthal Ltd

Oxford : A. Rosenthal , 1949
(click for more details about Catalogue 21. Judaica and Hebraica From the Libraries of the Late Dr. A. Büchler, Dr. Robert Eisler, Prof. Dr. Samuel Krauss, Prof. Scheftelowitz, and others)
View all from this seller>