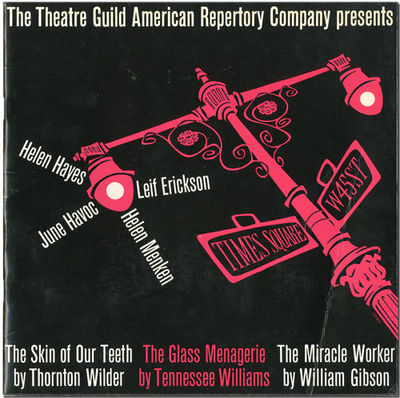 by [Wilder, Thornton; Tennessee Williams, and William Gibson]
[New York]: The Theatre Guild, Inc., 1961. [36]pp. Oblong Quarto. Decorated stiff wrappers. Numerous black & white production photographs and portraits. Crease to front wrapper, some soiling and creasing to the rear wrapper, else very good. First edition. Production program encompassing three plays, one each by Thornton Wilder, Tennessee Williams, and William Gibson, each produced under the personal supervision of the author. The plays were presented under the auspices of the United States Cultural Program and were to be presented in repertory. Each play and author is discussed in depth, and the actors who appear in repertory are featured. The actors include Helen Hayes, Leif Erickson, June Havoc, and Helen Menken, among others. (Inventory #: WRCLIT70675)
$30.00 add to cart or Buy Direct from
William Reese Co. - Literature
Share this item