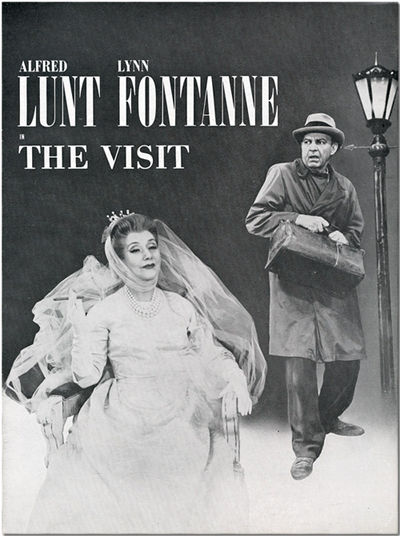 by [DÃ¼rrenmatt, Friedrich]: Brook, Peter [director]
[New York: The American Theatre Society, 1960. Quarto. Pictorial self-wrappers. Black & white photographs. About fine. A souvenir program produced for the run of the national tour of the play, starting in Wilmington in 1959, touring fifteen major cities, culminating in a two-week engagement at the New York City Center Theatre. The play was adapted from DÃ¼rrenmatt's German text by Maurice Valency, and starred Alfred Lunt, Lynn Fontaine, Thomas Gomez, Glenn Anders, and the "New York cast of 35," et al. Additionally, the program features an article by J. Mason Brown reprinted from the SATURDAY REVIEW regarding the Lunts' relationship, photos from early Theatre Guild productions, scenes from the play, and an article by Maurice Valency reprinted from the NYT regarding his adaptation. (Inventory #: WRCLIT70665)
$45.00 add to cart or Buy Direct from
William Reese Co. - Literature
Share this item