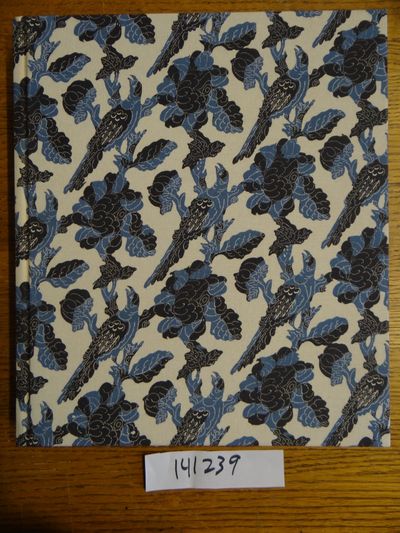 by Peck, Amelia (ed.)
New York: Metropolitan Museum of Art, 2013. Hardcover. VG. Boards covered in cloth patterned after catalogue #116, a blue print panel; black title block on spine with white lettering; color maps on end pages; x, 350 pp. with 360 color illustrations. Catalogue from the exhibition held September 2013 through January 2014. This is the first book to investigate the story of textiles from the perspective of the history of design, rather than the viewpoint of trade, and how those designs traveled across the globe. Includes more than 120 works with full-page images as well as detail shots. With maps, a glossary and bibliography, in addition to several scholarly essays. "Beginning in the 16th century, the golden age of European navigation created a vigorous textile trade, and a breathtaking variety of textile designs subsequently spread across the globe. Trade textiles blended the traditional designs, skills, and tastes of their cultures of origin, with new techniques learned through global exchange, creating beautiful new works that are also historically fascinating. Interwoven Globe is the first book to analyze these textiles within the larger history of trade and design. Richly illustrated texts explore the interrelationship of textiles, commerce, and taste from the age of discovery to the 19th century, including a detailed discussion of 120 illuminating works. From the elaborate dyed and painted cotton goods of India to the sumptuous silks of Japan, China, Turkey, and Iran, the paths of influence are traced westward to Europe and the Americas. Essential to this exchange was the trade in highly valued natural dyes and dye products, underscoring the influence of global exploration on the aesthetics and production techniques of textiles, and the resulting fashion for the 'exotic.'"--Publisher's website. (Inventory #: 141239)
$60.00 add to cart or Buy Direct from Mullen Books
Share this item