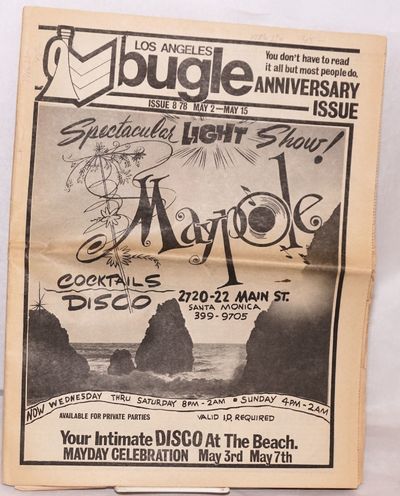 by Cobbs, David L., editor
Los Angeles: Bugle, 1978. Newspaper. 40p. folded tabloid newspaper, photos, ads, listings, more b&w photos, very good on newsprint. The name and format has changed from the earlier Waltzing Bugle days and even from 1977's Los Angeles Bugle days. Previously a magazine it is now a tabloid with a lot more entertainment coverage. After years of being mainly a throwaway guide to baths and bars the paper was finally including features and reviews. Still mostly ads for bars, and gay-owned services and shops. Only 4 listings of the various Bugle incarnations in OCLC as of 4/2014. AKA The Waltzing Bugle and The Bugle. (Inventory #: 186390)
$25.00 add to cart or Buy Direct from Bolerium Books
Share this item