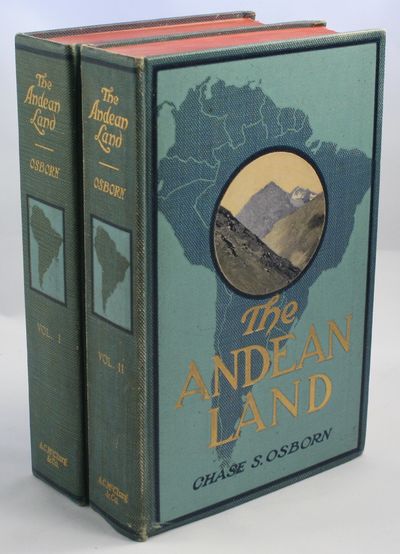 by Osborn, Chase S[almon]
Chicago: A.C. McClurg, 1909. First Edition. Hardcover. Very good. Two volumes (pp. 312; 331) bound in illustrated blue cloth, with more than 50 illustrations from photographs and 4 maps (3 folding). Light rubbing to extremities, spines toned (but fully legible). Internals clean and sound. Bookplate of S. James Tuffree on front free endpaper of each volume. Osborne (1860-1949) was a journalist, entrepreneur, and ultimately Governor of Michigan. In the Introduction he describes a recent rise in interest in South America: "Even touring agents and travelling people, both commerical and otherwise, are awakening to the fact that there are other Rivieras, that the Patagonian channel rivals the Norse coast, and that there is a charm of nature and newness in South America quite equalling in attractiveness the ancient monuments of Egypt. Nowhere are there wilder men than in the Amazon jungles; not even in the Himalayas are there more majestic peaks;...Africa presents no greater range for the botanist or zoologist and is not so accessible. If one seeks rest, adventure, or the exploitation of new regions, he can find all in South America. This volume understakes to tell some things of South America...and to give routes of travel and suggestions as the author found valuable in travelling in South America from Pamana to Patagonia..." (Inventory #: 14478)
$85.00 add to cart or Buy Direct from Walkabout Books
Share this item

The Voice of Truth

Navajivan Publishing House , 1969
(click for more details about The Voice of Truth)

Life and Times of H.H. Kavanaugh, D.D., One of the Bishops of the Methodist Church, South

Nashville, TN 1884
(click for more details about Life and Times of H.H. Kavanaugh, D.D., One of the Bishops of the Methodist Church, South)
View all from this seller>