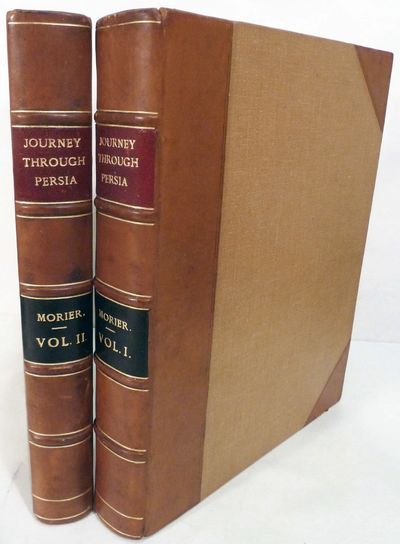 by Morier, James
London: Longman, Hurst, Rees, Orme, And Brown, 1818. First editions. Hardcover. Modern half calf and tan cloth, raised bands, spine labels in black and red lettered in gilt. Near fine. 2 vols. 437 & 435 pages. 4to, 28.5 x 24 cm. Seventeen aquatints, three engraved folding plates, and nine engraved plates, most after designs by the author. Index. Lacks errata sheet, half title and list of plates re first journey. Engraved frontispiece, four hand-colored aquatints (two folding, twelve uncolored aquatints, two maps, and forty-seven wood engravings. Errata sheet. Index, half-title, and list of plates re second journey. Best known as the author of "The Adventures of Haji Baba of Ispehan," Morier was an old Near East hand, having been born in Smyrna where his father was Consul-General of the Levant Company in Constantinople. As private secretary to Sir Harford Jones, British Ambassador to the Shah, Morier attended the preliminary negotiations of the infamous treaty of 1812 in Teheran between Britain and Persia. Britain's subsequent failure to uphold her part of the alliance in supporting Persia against the Russian advance in Azerbaijan led to the eclipse of the British star at the Qajar court. ABBEY TRAVEL 357, 358. Two bookplates first "Journey," one armorial, one bookplate "Second Journey." Fold out maps toned, some plate offsetting to text more predominant in Volume I, four hand-oolored aquatints, Volume II, clean, bright and fresh. (Inventory #: 20341)
$2,550.00 add to cart or Buy Direct from
Roy Young Bookseller
Share this item
Roy Young Bookseller, Inc.
Offered by

Joan Mitchell; An Exhibition of paintings from October 25 to November 25, 1989

New York : Robert Miller Gallery , 1989
(click for more details about Joan Mitchell; An Exhibition of paintings from October 25 to November 25, 1989)

London : Fine Art Society , 1905
(click for more details about The Flower Book. Reproductions of Thirty-Eight Watercolour Designs by Edward Burne-Jones)
View all from this seller>