The present state of music in Germany, the Netherlands, and United Provinces. Or, the journal of a tour through those countries, undertaken to collect materials for a general history of music 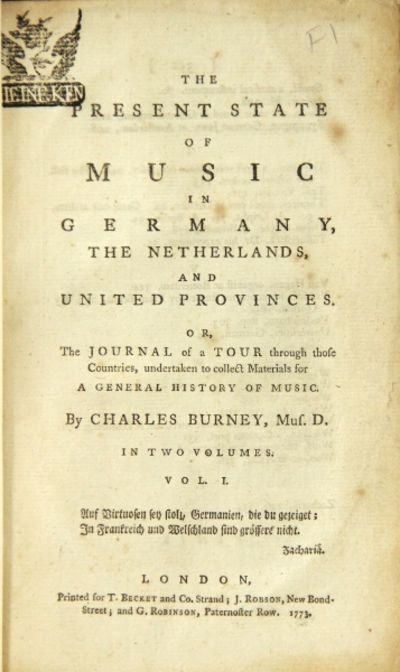 by Burney, Charles
London: printed for T. Becket, et. al, 1773. First edition, 2 volumes, 8vo, pp. viii, 376; vi, [2] errata, 352; printed music in the text; includes leaf [A1] in volume II containing a prospectus for printing by subscription Burney's General History of Music which, when published contained a long and influential list of subscribers (including Johnson - who wrote the Dedication to the Queen - Reynolds, Warton, Thrale, and Cowper); recent half tan calf antique over marbled boards, red morocco label on spine; old "Heineken" rubberstamp in top margin of title page in title page of volume I; early 20th century ink ownership inscription in volume II; occasional neat and informed annotations in pencil in the margins; text block very good, overall appearance is fine. Fleeman notes that Burney issued the prospectus for The History of Music 10 January 1774. The prospectus here is dated April 20, 1773. (Inventory #: 45019)
$862.50 add to cart or Buy Direct from
Rulon-Miller Books
Share this item

Confessions of a psychic. The secret notebooks of Uriah Fuller

Teaneck, N.J. : Karl Fulves , 1975
(click for more details about Confessions of a psychic. The secret notebooks of Uriah Fuller)

[New York, Philadelphia, Boston : Max Holden] , 1941
(click for more details about After the dessert)
View all from this seller>