[Screenplay and Photo Archive for:] THE FRENCH CONNECTION 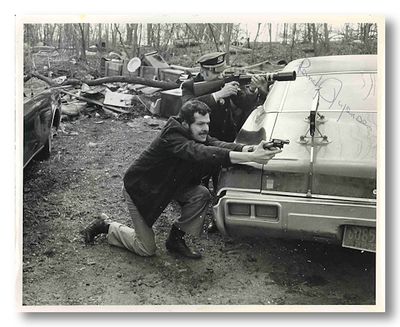 by Tidyman, Ernest [screenwriter]
[New York: D'Antoni Productions], 1970. Two volumes: [1],93 leaves; [1],93 leaves plus lettered inserts. Quarto. Mimeographed typescript, printed on rectos only, the second shot through with revised leaves on salmon stock. Bradbound in printed production wrappers. Ownership signature in each and ink inscriptions in 2nd (see below), wrappers a bit frayed and torn at overlap edges, internally very good or better. Accompanied by a file of associated photographs and other material, as noted below. Two unspecified "revised" pre-production drafts of Tidyman's multi-award winning screenplay, adapted in part from the 1969 book by Robin Moore. The October 1971 release was directed by William Friedkin, and starred Gene Hackman, Fernando Rey, Roy Scheider, Tony Lo Bianco, Sonny Grasso, et al. As part of a five Oscar sweep, Tidyman won for his screenplay, Hackman won as Best Actor, Friedkin won as Best Director, and the film won Best Picture. BAFTA, Golden Globes and WGA awards piled up, and in 2005 it was inducted into the National Film Registry. Each of these scripts bears the ownership signature of Randy Jurgensen, who in addition to acting as production assistant and liaison with the NYPD during the New York production, portrayed a police sergeant in the film. Jurgensen has had a long and distinguished career, both as a NYPD Officer (1958-78), and as consultant to, and actor in, a substantial list of film and television productions, including association with a number of films by William Friedkin, of which this was the first, as well as other major films, such as THE GODFATHER, wherein he played the gunman who administered the coup de grace to Sonny Corleone. The second, revised script also bears signed later inscriptions from Sonny Grasso and "Billy" [Friedkin], the latter: "To Randy, with love, Billy 5/1/13." Jurgensen is the featured interviewee in a documentary about the film's production accompanying recent SD dvd and Hi-Def releases of the film. The two scripts are accompanied by a file of 39 8 x 10" production stills (not publicity stills) the considerable majority of which are of sequences in which Jurgensen had a role and one of which is signed by him, plus one of him on stage with Friedkin and a larger group of people at a law enforcement award ceremony related to the film. Also present is a sequence of nineteen 5 3/4 x 4" color prints of photographs of later vintage by Jurgensen of the sites featured as locations in NYC for filming, compiled as a guide for the locations in the later interview noted above for the Blu Ray release. Also present are some related items, such as his retained carbon of his employment agreement for the production, a check stub for residuals after the film was released to television, and some ephemeral items related to screenings and honors for the film and players. In sum, an excellent lot of material, with iron clad provenance, for one of the major film achievements of its generation and genre. (Inventory #: WRCLIT70104)
$6,500.00 add to cart or Buy Direct from
William Reese Co. - Literature
Share this item

THE LANCASHIRE COLLIER GIRL, A TRUE STORY. TO WHICH IS ADDED, PATIENT JOE, OR THE NEWCASTLE COLLIER, AND DAN AND JANE; OR, FAITH AND WORKS; A TALE [wrapper title]

Dublin : Sold by William Watson ... Printer to the Cheap Repository.. , 1819
(click for more details about THE LANCASHIRE COLLIER GIRL, A TRUE STORY. TO WHICH IS ADDED, PATIENT JOE, OR THE NEWCASTLE COLLIER, AND DAN AND JANE; OR, FAITH AND WORKS; A TALE [wrapper title])
View all from this seller>