Signed Treaty from the Treasury Department 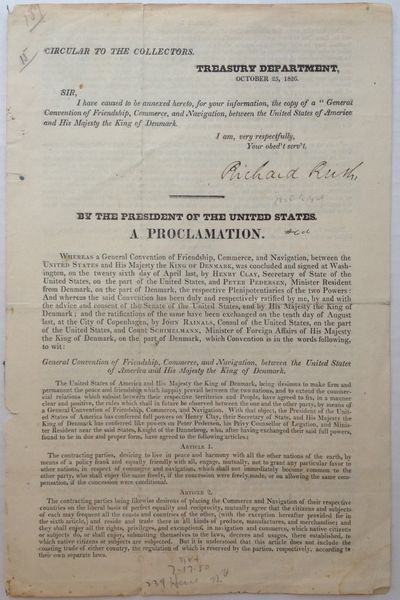 by RUSH, Richard (1780 - 1859)
Washington, 1826. unbound. 3 pages, 11.5 x 7.5 inches, Washington, October 25, 1826. Printed Treasury Department treaty between the U.S. and Denmark, authorized for issue to the various collectors of port as it pertained to navigation and trade, in part: "...Now, therefore, be it known, that I, John Quincy Adams, President of the United States, have caused the said Convention to be made public..." Signed by Rush near the top of the first page. Several folds; small chip on the center fold; mounting remnants on the back; small damp-stain on the lower right corner. Good condition. Richard Rush was Secretary of the Treasury under John Quincy Adams and was best known for persuading Monroe and Adams to ratify the Monroe Doctrine. (Inventory #: 249665)
$350.00 add to cart or Buy Direct from
Argosy Book Store
Share this item