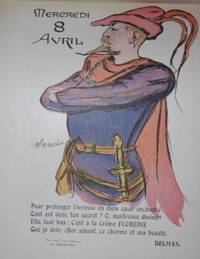 by Devries, Maurice, ed.
Paris, 1913. Full Leather. Very Good. 17 by 13 cm. One caricature per page, for a total of 366 caricatures (one per day, plus an introductory illustration), each in color, almost all accompanied by a few lines of light verse. The caricatures are of the famous of the day, from all walks of life -- theater, politics, the military, literature and graphic arts, high society, commerce, etc. -- and a few of an earlier time (Alfred de Musset, Cyrano du Bergerac, Jesus), not all of whom were French. The non-Gallic caricatures include people such as Andrew Carnegie, John Jacob Astor, Rockefeller and Paderewski. A few of the drawings are of fictional characters -- debatably this might include Cyrano or Biblical characters such as Methusaleh, and then some non-human characters such as Chanticler. Altogether it is a smorgasbord feast of colorful absurdist portraiture that can probably only be fully absorbed over many days. Contributors include, among the artists, Rip, Sem, Hemard, Mich, Poulbot, etc. -- a who's who of French comic illustrators of the day, in other words, some of whom are themselves depicted in the illustrations -- with the verses and captions by Jean Bastia, Numa Bles, Dominique Bonnaud, etc. Spine on top, and opens verticallly, or in typical calendar style, with the first half of the year represented on one side of the leaves, and then the book is flipped to reveal the second half on the verso of the leaves. Light wear to the binding. (Inventory #: 003195)
$350.00 add to cart Available from
White Fox Rare Books & Antiques
Share this item
White Fox Rare Books and Antiques
Offered by