MYSELF AND STRANGERS. A Memoir of Apprenticeship 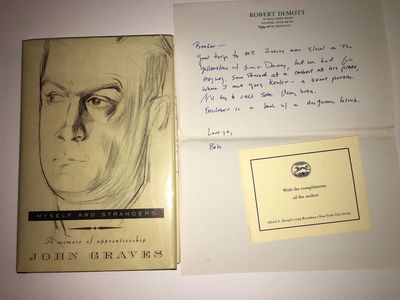 by Graves, John
New York: Knopf, 2004. First edition. Hardcover. A fine copy/a fine dust jacket. This much admired author of Goodbye to a River, and other nonfiction classics recounts his long, winding journey toward becoming a writer in the years after WWII. ("Compliments of the Author" card laid in along with a letter from a friend). Drawing upon memory and his journals, Graves moves quickly through his early days in Texas and his brief dramatic stint in the Pacific with the marines. The story starts in earnest with the year after the war, when his quest to find himself takes him to Mexico, where he punches out his young man's recollections on an old portable typewriter, beginning a lifelong habit of looking inward, of observation and note-taking. We follow him to Martha Foley's famous short fiction class at Columbia University, and then to Europe, where he spends nearly three years in 1950s Spain, part of the ex-pat communities of Mallorca, Madrid, and Tenerife, keeping the journals that form the basis of this memoir. From the estate of Beef Torrey, writer, raconteur and friend to many writers. (Inventory #: 12857)
$60.00 add to cart or Buy Direct from Ed Smith Books
Share this item