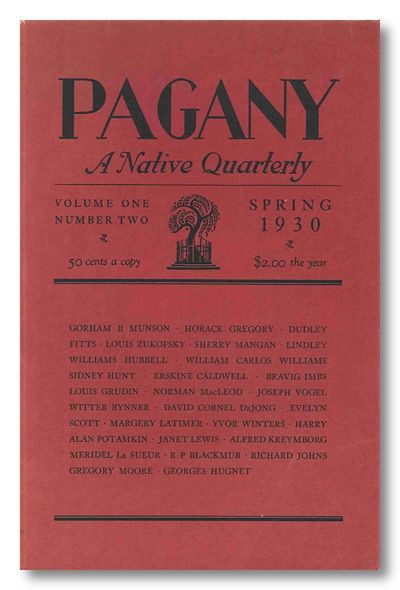 by Pagany
Boston & Redding, 1933. Volume one number one through volume three, number four. Twelve issues. Printed wrappers. Wrappers of I:1 affected by old damp causing color bleed to prelims and terminal leaves (somewhat offset by a brief inscription from Johns above the copyright notice); small nick in spine of I:3; II:4 sunned at edges; wrappers of III:4 a bit damp marked at edges resulting in some color bleed to extreme margins of facing leaves, otherwise a very good set. Edited by Richard Johns. A complete run of this distinctive American periodical, among the very best of its era. In launching Pagany, Johns sought the support and editorial assistance of William Carlos Williams, inviting him to become a co-editor and contributor, and although Williams declined the former official function, he granted permission for Johns to use "Pagany" as the title of the magazine (derived from Williams's 1928 novel, A VOYAGE TO PAGANY) and contributed mightily, including the "manifesto" that opens the first issue. Johns provided an explanation of the magazine's title in the first issue: "Pagus is a broad term, meaning any sort of collection of peoples from the smallest district or village to the country as an inclusive whole. Taking America as pagus, any one of us as the paganus, the inhabitant, and our conceptions, our agreements and disagreements, our ideas, ideals, whatever we have to articulate is pagany, our expression." (A RETURN TO PAGANY, p.50). The roster of authors is remarkable: Williams (substantial sections of WHITE MULE appear herein), McAlmon, Rexroth, Macleod, Tyler, Ford, Zukofsky, Winters, Crosby, Butts, Munson, Caldwell, Stein, Seaver, Bynner, Imbs, Scott, J.Lewis, Blackmur, Hugnet, Halper, Carnevali, Roditi, Burke, Reznikoff, Atget, Dahlberg, Pound, Thoma, Aiken, Bunting, Cummings, Dos Passos, Loy, Abbott, Cheever, Cocteau, Fitts, Herbst, Porter, Rolfe, Toomer, Conroy, Farrell, Neagoe, et al. HOFFMAN, et al, p. 297. (Inventory #: WRCLIT70862)
$750.00 add to cart or Buy Direct from
William Reese Co. - Literature
Share this item

SOME WOODCUTS BY HANS BURGKMAIR PRINTED AS AN APPENDIX TO THE FOURTH PART OF LE RELATIONI UNIVERSALI DI GIOVANNI BOTERO, 1618

Oxford : Printed for Presentation to the Members of the Roxburghe Club , 1960
(click for more details about SOME WOODCUTS BY HANS BURGKMAIR PRINTED AS AN APPENDIX TO THE FOURTH PART OF LE RELATIONI UNIVERSALI DI GIOVANNI BOTERO, 1618)
View all from this seller>