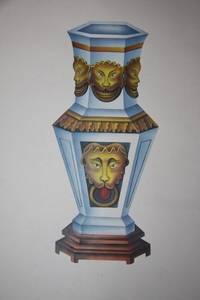 by Beauvalet. Chevalier de Saint-Victor
Paris. Box. Very Good Plus. A suite of 23 dazzling color plates of Japanese vases produced with a novel "pochoir"-like process around 1840. Each measures 46.5 by 35.5 cm, and in a small cursive handwritten note on the title page, the prints are described as "aquarelles miniatures", which happens to be the term Beauvalet used for his process. Beauvalet published a book in 1835 entitled "Aquarelle-Miniature Perfectionnee reflets metallique et chatoyans et peintre a l'huile sur velous en six leons," and in this book he speaks of a process of mixing watercolors which were to be successively applied to paper in a stencil process -- tantamount to what is now known as pochoir. Whether the procedure described accurately described fully what Beauvalet actually did so that the same effects could be replicated, it is indisputable that Beauvalet managed to achieve an uniquely lustrous effect, with colors and a sheen produced in this and the small body of other works credited to Beauvalet that were unlike anything else being produced at the time, whether through outright painting, start to finish, or any other kind of printing technology. Unlike the best chromolithography, for example, there is a softness to the color, and the tonal gradation is peerless. Notwithstanding the publication of this work, Beauvalet's process did not catch on. Just like later pochoir, to be done right the process was both labor and skill intensive -- it was not necessarily less demanding than simply traditional painting. And it would appear that even though this work was "printed", not many copies of it were made. Indeed, we have not been able to locate any other copies of this work. Beauvalet did produce two large series of plates using the same process, one consisting of 96 drawings of ancient and Etruscan vases and other objects, made at the behest of Louis Philippe, and a series of drawings of fruits and butterflies for the Empress Marie Louise (the second wife of Napoleon, who after his overthrow, became the Duchess of Parma). This group of Japanese vases was owned by A. M. Plailly, which we know from the small inscription on the title page. Unknown if the set is complete. All the vases are bright and fresh. Light occasional hand soiling to the margins. One minor marginal closed tear. Two plates with darker corner soiling, not coming close to the image (nor within the framing lines). One plate with a large-ish corner loss, also not coming even close to the image. The backs of all the plates have four paste spots, indicating that at one time the suite was matted and framed. Now housed in a modern black cloth box. (Inventory #: 003256)
$15,000.00 add to cart Available from
White Fox Rare Books & Antiques
Share this item
White Fox Rare Books and Antiques
Offered by

[Extra-Illustrated] Views in Sussex, Consisting of The Most Interesting Landscape and Marine Scenery in the Rape of Hastings, From Drawings by J. M. W. Turner, R.A. Illustrated by Historical Descriptions. The Plates Engraved by W. B. Cooke, and Published Under the Auspices of John Fuller, Esq. of Rose Hill. The Scientific and Explanatory Notices of the Drawings by R. R. Reinagle, A.R.A.

London : John Murray and W. B. Cooke , 1819
(click for more details about [Extra-Illustrated] Views in Sussex, Consisting of The Most Interesting Landscape and Marine Scenery in the Rape of Hastings, From Drawings by J. M. W. Turner, R.A. Illustrated by Historical Descriptions. The Plates Engraved by W. B. Cooke, and Published Under the Auspices of John Fuller, Esq. of Rose Hill. The Scientific and Explanatory Notices of the Drawings by R. R. Reinagle, A.R.A.)