Testimony on appointment of Wilbur J. Cohen to be Assistant Secretary of the Department of Health, Education, and Welfare 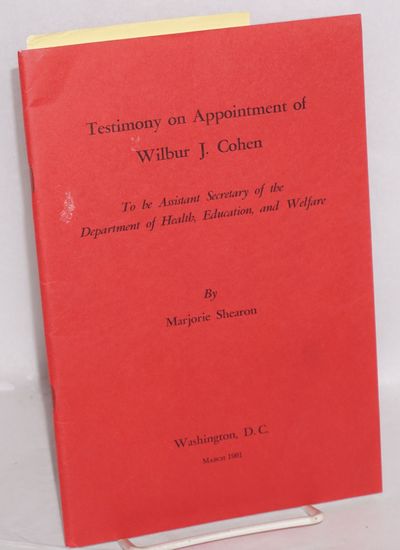 by Shearon, Marjorie
Chevy Chase, MD: Shearon Legislative Service, 1961. 43p., wraps, occasional phrase underlined, yellow slip laid in updating the situation as of March 24, 1961. Argues that Cohen is determined to introduce socialized medicine and other un-American influences; centerfold is a chart depicting the "Net of subversion in the United States Government." The conspiracy is said to extend back to the Silvermaster spy ring. Not explicitly anti-Semitic, but Shearon fumes that in her testimony "I wonder why an American of pioneer ancestry like myself should be asked to testify under oath while Wilbur J. Cohen, with a subversive record, was not asked to take an oath. (Inventory #: 186781)
$20.00 add to cart or Buy Direct from Bolerium Books
Share this item