Memoirs of the life of Colonel Hutchinson...with original anecdotes of many of the most distinguished of his contemporaries, and a summary review of public affairs...To which is prefixed the life of Mrs. Hutchinson, written by herself 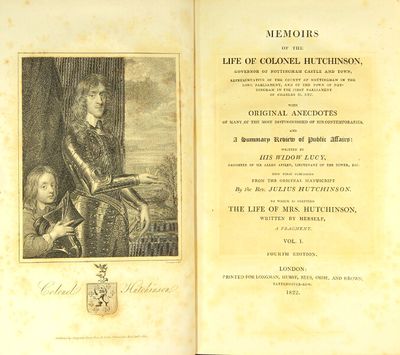 by Hutchinson, Lucy Apsley
London: Longman, Hurst, Rees, Orme, and Brown, 1822. Fourth edition, 2 volumes, 8vo, pp. [2], xxvi, 348; [2], 384; engraved frontispieces, 4 plates of which 3 folding; full contemporary gilt-ruled calf, red gilt-lettered spine labels, spines darkened and a bit rubbed, some foxing to preliminaries, else very good and sound. Composed after the death of the author's husband in 1664, the Memoirs were originally intended "for the preservation of [John Hutchinson's] memory and the instruction of his children," and were not published until 1806 (DNB X, p. 341). The work is best known for the author's accurate history of the civil war in Nottinghamshire and the depiction of an upper-class English puritan family. Lowndes, p. 1150. (Inventory #: 45224)
$143.75 add to cart or Buy Direct from
Rulon-Miller Books
Share this item