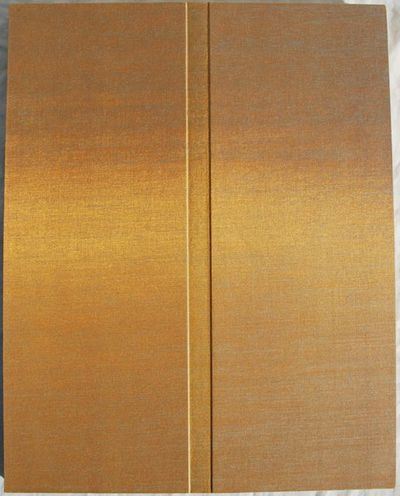 by Kittay Maryatt, et al
Claremont, CA: Scripps College Press, 2011. First Edition. Hardcover. New. LIMITED EDITION of 103 copies, this is number 72. Folio. 14 1/2 x 11 1/4 inches. [36] pp The text of this book presents a thirteenth-century Rumi poem as interpreted by Coleman Barks, with responses from the students in the Typography and Book Arts Class, each page is illuminated with linoleum cuts in blue, red, and purple. Bound in Ginga Iridescent Orange book cloth, spine bound open so that the signatures and stitching are visible. SIGNED by Kitty Maryatt and the 12 Typography and Book Arts students. Fine. The text includes a poem by Coleman Barks, "An Understanding of the Question," which was originally published in The Essential Rumi in 1995, and texts created by the students of the Scripps College Typography and Book Arts Class as responses to the Bark poem. The visual aspects of this book were inspired by the geometric structures of medieval book imagery. The colors of the linoleum blocks reflect the preponderance of lapis lazuli blue, crimson red, and royal purple in medieval miniatures; the binding introduces the color gold, which was prevalent in medieval manuscripts. The Rumi poem, interpreted by Coleman Barks, was set in 14 pt. Scripps College Old Style, and the responses were set in 12 or 14 pt. Centaur and Arrighi. Front and back matter were set in 14 pt. Scripps College Old Style, and the display letters were set in 18 or 24 pt. Weiss Initials. Sheets of Rives BFK paper are folding into signatures which are sewn over Tyvek-reinforced tapes with gold thread, and are attached to the covers. (Inventory #: OYUC52811-1)
$125.00 add to cart Available from
John Howell for Books
Share this item