Friendship: So Long As We Love We Serve; So Long As We Are Loved By Others I Would Almost Say That We Are indispensable; & No Man Is Useless While He Has A Friend. R. L. S 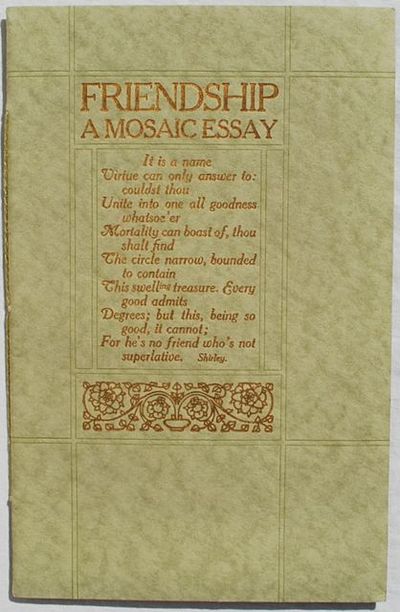 by Paul Elder (1875-1948), editor
San Francisco:: Paul Elder & Company,, 1910. Second Edition, reprinted. Like New. 8vo. 8 3/8 x 5 3/8 inches. [iv], (12) pp. Tipped-in frontispiece is a Robert Louis Stephenson poem "Just One Friend" within a decorative border, the tipped-in illustration mounted within a typographic border printed on the second leaf, title page printed in red and black with vignette, text printed in red and black with red running head and decorative initials; text clean, unmarked. Green printed wrappers, with green rules, printed in gilt, stitched with silk ties; binding square and tight. Comes in the original mailing envelope that matches the wrappers, printed in gilt on the front; Envelope rubbed, the flap is torn at the fold about 3 inches. RARE. Book in Fine condition; Envelope is in Good condition. This book consists of a series of apothegms on Friendship extracted from the works of Emerson, Montaigne, George Washington, and many, many others. The book is printed by the Tomoye Press, which at this time was run by John Henry Nash, this publication with all the hallmarks of Nash's work. The Tomoye Press was owned by Paul Elder, but run by Nash. Nash's contribution to Elder's publications was profound; almost all of Elder's memorable and collectable works were designed and typeset by Nash. Nash was a talented designer and an exceptional compositor and technician. His trademark was the mitred rule - the vertical and horizontal lines that appear in many of Elder's books - which are quite tricky to set. Reference: Checklist of the Publications of Paul Elder & Co.: No. 108. Only one copy found at Harvard; no copies of this issue in the trade at the time of listing. (Inventory #: SGG213A-17)
$100.00 add to cart Available from
John Howell for Books
Share this item