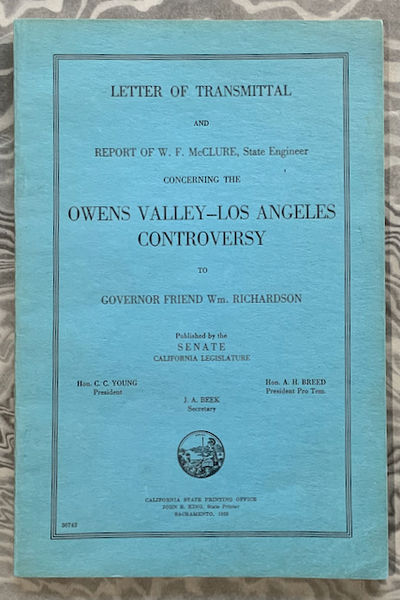 by Wilbur Fisk McClure
Sacramento, CA: John E. King, 1925. First Edition. Paperback. Very Good. 8vo. 8 7/8 x 5 7/8 inches. 101 pp. Text clean, unmarked, except for an ink smudge on page 33, which is likely a result of the printing process. Blue printed wrappers; binding square and tight, minor toning. An exceptionally clean and bright copy. Fine. On November 16, 1924 farmers in the Owens Valley seized the Alabama Gates and dynamited the Owens Valley Aqueduct, which supplied water to Los Angeles, allowing water from the aqueduct to flow into the Owens River. This act of sabotage was one of the last acts in the California Water Wars of the early twentieth century. This volume is a report from Wilbur Fisk McClure, State Engineer, to Governor Friend William Richardson. The report includes back-ground on the Owens Valley resident's efforts to secure relief, engineer's reports on the capacities of the Aqueduct, and numerous commentary and historical documentation about the views of residents of the Owens Valley. McClure was very active in Los Angeles engineering and real estate in the 1880s, and later was appointed State Engineer. The McClure House in Highland Park has been designated as Historic Cultural Monument No. 107 by the City of Los Angeles. However, not enough has been written about the activities of McClure, a founder of the Garvanza neighborhood in Los Angeles. (Inventory #: FGO713-3)
$550.00 add to cart Available from
John Howell for Books
Share this item

by Kathryn I. Rickard

Cobleskill, NY : Kathryn I. Rickard , 1993
(click for more details about My Adventures in Minibiliomania)
View all from this seller>