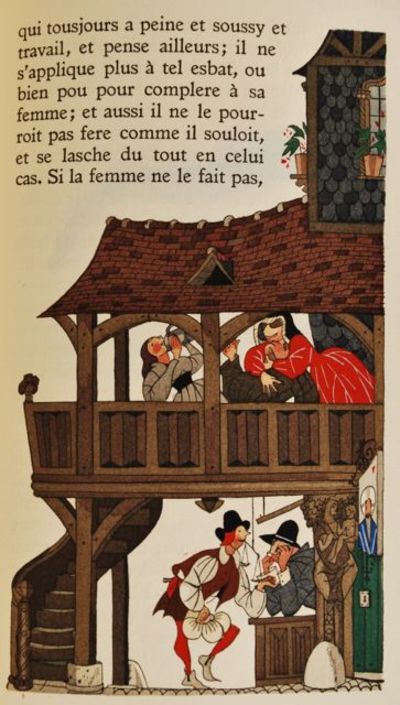 by Anonymous
Paris:: Editions du Rameau D'Or, Paul Cotinaud,, 1945. Leather Bound. Very Good. Henry Lemarie. LIMITED EDITION of 750 copies, this is number 458, printed on sur papier pur fil. 12mo. [x], (162), [2] pp. 76 wood engraved and hand-colored illustrations by Henry Lemarie throughout, with colored initial letters, includes an additional illustrated title page titled in red, title-page vignette, introduction by Paul Cotinaud; text clean, unmarked. Full orange calf, dark blue leather spine label titled in gilt, two yellow leather on-lays at the head and foot of spine, top edge gilt, hand-colored decorative end-papers; binding square and tight. Fine. Les Quinze Joyes de Mariage (The 15 Joys of Marriage) is an anonymous late fourteenth- or early fifteenth-century French satire in prose that presents a picture, full of sharpness and humor, on the deceits and conflicts that afflict the married state. The misogynist satire is allied to a pitiless analysis of the blindness of husbands in everyday, concrete situations. The author remains anonymous in spite of the eight lines of octosyllables placed at the end of the text that contain the name of the author. The riddle has held its secret until today, but several names have been proposed, most often Antoine de la Sale (1385-1460). Henry Lemarie (1911-1991), a French illustrator from Tours, is the most famous French miniaturist of the twentieth century; his work is highly sought after by bibliophiles. Lemarie studied classical literature under the Jesuits, then from 1930 to 1936 studied at the Ecole des Beaux-Arts in Paris. His work is influenced by Fra Angelico, Bruegel the Elder, and other Medieval and Renaissance artists. (Inventory #: EU1010-1)
$650.00 add to cart Available from
John Howell for Books
Share this item