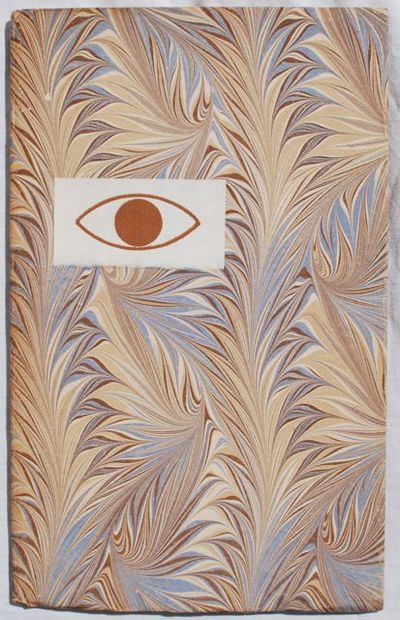 by Norman Lewis Corwin (1910-2011)
Northridge:: Invierno Press,, 1979. First Edition. Paperback. Like New. LIMITED EDITION of 50 copies printed by Ward Ritchie in Goudy 30 and Centaur types on T. Edmonds paper on an Albion Handpress for the Invierno Press, completed in March 1979. 8vo. 8 1/2 x 5/38 inches. [18] pp. Half-title, 3-color design on the title page, blue and green headpiece at the head of Corwin's text, printer's device in green on the colophon; text clean, unmarked. Cockerell marbled paper over stiff wrappers, paper label on front cover with CBS "eye" logo on front cover; binding square and tight, light shelf wear to extremities. SIGNED by Norman Corwin, Robert Nathan (who contributed the Foreword), and Ward Ritchie, on the colophon. With the SCARCE prospectus, printed on the verso of a slip of Cockerell marbled paper, loosely laid in. Near Fine. Ritchie remarks that the text of Network at Fifty "was the radio broadcast that Norman Corwin read over the air on the fiftieth anniversary of the Columbia Broadcasting System. Robert Nathan wrote an introduction. I printed it for the Invierno Press. Each copy was signed by Corwin, Nathan and me." Norman Corwin was an American writer, screenwriter, producer, essayist and teacher of journalism and writing. His earliest and biggest successes were in the writing and directing of radio drama during the 1930s and 1940s. The principal of the Invierno Press was Carl Haverlin, whose Invierno Press published a total of three books; this, and a book each of Paul Landacre and James Joyce. Reference: Ritchie: Laguna Verde Imprenta, 1975-1987, wr 14. (Inventory #: WHQK114-11)
$250.00 add to cart Available from
John Howell for Books
Share this item