The Monterey Peninsula: California at its Best 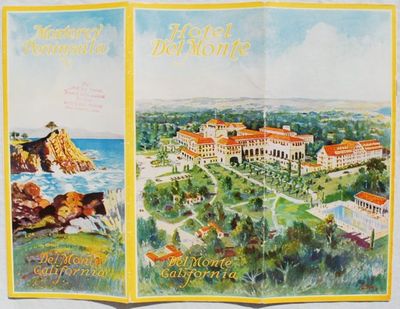 by Hotel del Monte
Del Monte, CA:: Del Monte Properties Company,, circa 1927. Paperback. Very Good. William H. Bull (1861-1940). Stapled Folding Brochure. 9 x 4 inches closed. Two sheets of paper stapled together at the center fold [24 panels], opens at the center-fold to 24 x 9 inches. Illustrated with water-colors and black-and-white photographs, decorative initials, the center-fold consists on 1 large color map of the Monterey Peninsula drawn by W. H. Bull; text clean, unmarked. Folding brochure of self-wraps with colored drawings; binding square and tight, rubbed, especially at the folds. Laid in is an invoice from the Hotel del Monte rubber stamped "Paid," and dated January 31, 1927, total charge is for $30.00 including room and board charge of $6.00 per night. Very Good. Del Monte, now incorporated into the City of Monterey, was a resort established by Charles Crocker, one of California's Big Four railroad barons. The grounds of the luxury resort hotel were created through the Southern Pacific Railroad's property division, Pacific Improvement Company, which completed the first hotel on the property in 1880. The Hotel Del Monte included the hotel, parkland, polo grounds, and a golf course, as well as the seventeen-mile drive from the hotel to Pebble Beach, which was developed as another portion of the resort. This brochure includes a color map illustrated by William H. Bull (1861-1940), a prolific and successful commercial artist. The Southern Pacific Company hired Bull as their first commercial artist and by 1915, he also produced work regularly for Sunset Magazine. He lived in San Mateo and produced illustrations for chamber of commerce publications. REFERENCE: Kurutz and Kurutz, California Calls You, pp. 98, 164-165. (Inventory #: SGG213B-17)
$150.00 add to cart Available from
John Howell for Books
Share this item

Santa Cruz, CA : Peter and Donna Thomas , 2021
(click for more details about Evidence: Overruns and Ephemera)
View all from this seller>