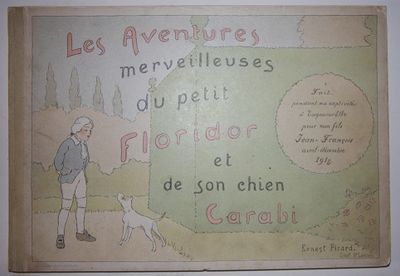 by Picard, Ernest
Brussels: J. E. Goossens, 1915. First Edition. Oblong, 24 by 35 cm. The theme of the story is a lost child's quest for home and his family, a theme that would have resonated for the author as a prisoner-of-war, both on his own account and also his son, who had not seen him for many months as a result of his service and then imprisonment. Along the way, Floridor and his pet dog have the kind of adventures that happen to little boys in such literature -- he is taken in by a group of acrobats, he escapes to sea, he is held hostage by a band of pirates, he escapes to shore where there are savages, etc. Through this the author imparts lessons about hard work and the like. The story takes place during the late eighteenth century, which must have also been see as a better time, notwithstanding the upheavals of the period. The illustrations are simple, with details not fussed over. A scarce title. (Inventory #: 003266)
$250.00 add to cart Available from
White Fox Rare Books & Antiques
Share this item
White Fox Rare Books and Antiques
Offered by