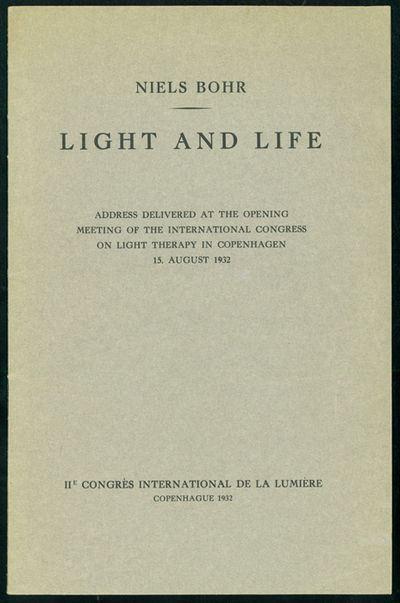 by Bohr, Niels
Copenhagen: IIe Congrès International de la Lumière, 1932. Bohr, Niels (1885-1962). Light and life. Address delivered at the opening meeting of the International Congress on Light Therapy in Copenhagen 15. August 1932. 10pp. Copenhagen: IIe Congrès International de la Lumière, 1932. 236 x 158 mm. Original printed wrappers. Fine copy. First Edition in English of Lys og liv, Bohr's lecture on "Light and life" delivered before an international congress of light therapists in Copenhagen. This pamphlet, dated 1932, apparently predates both the lecture's publication in Danish in Naturens Verden and the English translation published in Nature, both of which were published in 1933. A German translation appeared in Naturwissenschaften in the same year. Bohr's lecture marks his first detailed attempt to apply concepts arising from quantum mechanics (particularly complementarity) to areas outside physics. "Here, for the first time, Bohr raised a question that was to preoccupy him, off and on, until his death: Would it ever be possible to push the analysis of living processes to the limit where they can be described in terms of pure physics and chemistry?" (Pais, p. 441). Bohr's lecture can be looked upon as one of the foundation stones of molecular biology in that it inspired the young physicist Max Delbrück—who was in the audience when Bohr delivered it—to switch from physics to biology "to find out whether indeed there was anything to this point of view" (quoted in Pais, p. 442). In 1935, two years after hearing Bohr's lecture, Delbrück and two other scientists published a paper on genetic mutations caused by x-ray irradiation, in which they concluded that the gene must be a molecule. The ideas expressed in this paper inspired Schrödinger to write his famous What is Life?, a work which in turn motivated Watson, Crick, Wilkins and other scientists to devote their careers to unraveling "the secret of the gene." Delbrück himself became a leader of what was known as the "phage group" of bacterial geneticists; in 1969, he received a share of the Nobel Prize for physiology / medicine for describing the means by which living cells are infected with viruses. "It is fair to say that with Max [Delbrück], Bohr found his most influential philosophical disciple outside the domain of physics, in that through Max, Bohr provided one of the intellectual fountainheads for the development of 20th century biology" (quoted in Pais, p. 442). Pais, Niels Bohr's Times, pp. 411; 441-42. Judson, The Eighth Day of Creation, pp. 32-35. . (Inventory #: 43092)
$4,750.00 add to cart or Buy Direct from
Jeremy Norman & Co.
Share this item
Jeremy Norman & Co., Inc.
Offered by

Montreal 1882
(click for more details about McGill University Medical Certificate for W.G. [William George] Henry, signed by Osler)
View all from this seller>