2 Autograph letters signed plus other materials 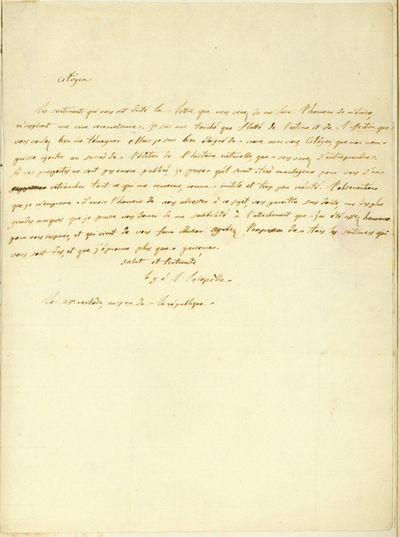 by Lacepede, Bernard Germain
1819. Lacépčde, Bernard Germain de (1756-1825). (1) Autograph letter signed, in French, to publisher M. Saugrain. 1 page plus integral address leaf. N.p., "25 ventose, an 7me de la République" (i.e., 15 March 1799). 233 x 188 mm. Top portion of address leaf torn away, not affecting text, lacuna where seal was broken, small marginal tear. (2) Autograph letter signed, in French, to Nicolas Viton de Saint-Allais (1773-1842). 1 page plus integral address leaf. N.p., 19 May 1819. 207 x 175 mm. Light marginal soiling. Together 2 letters, enclosed in cloth portfolio stamped "P.V.H." in gilt on the front cover; accompanied by several printed items, including 2 engraved portraits of Lacépčde, brief extracts from several of his printed works and 2 biographical notices. Very good. From French naturalist Lacépčde, best known for his collaboration with Buffon on the continuation of the latter's monumental Histoire naturelle, to which Lacépčde contributed eight volumes including the five-volume Histoire naturelle des poissons (1798-1803). These volumes were issued by the French publisher Saugrain, to whom the first letter above is addressed. Saugrain had apparently wanted to feature Lacépčde's name in a prospectus for the Histoire naturelle; Lacépčde responded by stating that although he was "as much touched as flattered by the esteem and affection you are pleased to show me," he was "far from believing" that his name "might add to the success of the edition of the Histoire naturelle that you are undertaking." He asked Saugrain that if the prospectuses had not yet been printed, "everything concerning me" should be removed "as useless and too little merited." In the second letter, written in the third person to genealogist Nicolas Viton de Saint-Allais, Lacépčde informed his correspondent that he was returning "the article [Saint-Allais] was so kind as to send me and to which I made a short addition, because the Mémoires of [Philippe de] Commines were on my desk." He further promised to send a certified copy of a genealogy to the French city of Vienne, which he would deposit "with great pleasure" in Saint-Allais's collection. Saint-Allais was the head of the Bureau Générale de la Noblesse de France. "Commines" refers to French historian and diplomat Philippe de Commines (1447-1511), whose Mémoires were published in 1524. (Inventory #: 43134)
$650.00 add to cart or Buy Direct from
Jeremy Norman & Co.
Share this item
Jeremy Norman & Co., Inc.
Offered by