Dear Judas, and Other Poems 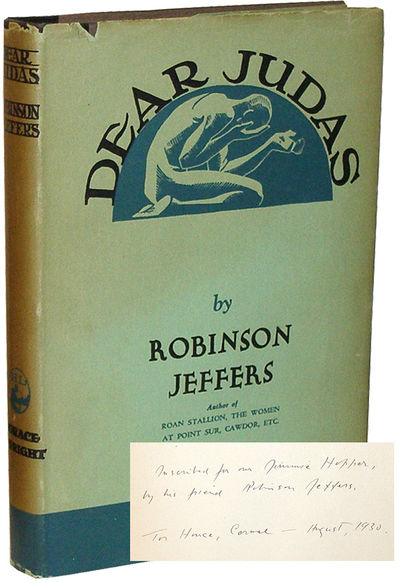 by Jeffers, Robinson
New York: Horace Liveright, 1929 First edition, first printing. Inscribed by Jeffers to the front free endpaper: "Inscribed for Mr Jimmie Hoppe, / by his friend Robinson Jeffers. / Tor House, Carmel - August, 1930." Publisher's black cloth over purple boards, lettered in gilt; in the original green dust jacket, with an illustration of Judas to the front panel in blue, lettered in dark blue and black. Near fine, with a hint of wear to the extremities, light toning to the fore edge, else fine, bright and clean pages; unclipped dust jacket, with some wear and chipping to the extremities, toning to the spine, short losses to the spine head and top edge of the front panel, some rubbing to the hinges, less toning than usual to the panels, else fine. This copy is inscribed by Robinson Jeffers to his friend and fellow author James M. Hopper. Jeffers inscribed this volume at Tor House, the home he built for his family in Carmel-by-the-Sea in California and the location at which he wrote the majority of his novels. Both Jeffers and Hopper, along with their contemporaries George Sterling, Upton Sinclair, Sinclair Lewis, and Jack London, were part of the group of authors that helped establish Carmel as a literary and artistic refuge in Monterey County. Although neither was a native of California, both Jeffers and Hopper ultimately settled in Carmel. Dear Judas is a collection of eight poems, including two longer poems, "The Loving Shepherdess" and "Dear Judas," as well as six shorter verses, "The Broken Balance," "Birth-Dues," "The Humanist's Tragedy," "Evening Ebb," "Hands," and "Hooded Night." In the titular poem, Jeffers retells the story of Jesus's passion story as a Noh play. In "The Loving Shepherdess," Jeffers tells the story of a female Christ figure as she travels up the California coast towards her ultimate fate of death during childbirth.. Inscribed by Author. 1st Edition.. Hard Cover. Near Fine/Dust Jacket Included. (Inventory #: RJ004)
$850.00 add to cart or Buy Direct from
B & B Rare Books
Share this item

Fox in Socks. A Tongue Twister for Super Children

New York: Random House , 1965
(click for more details about Fox in Socks. A Tongue Twister for Super Children)
View all from this seller>