The Women at Point Sur 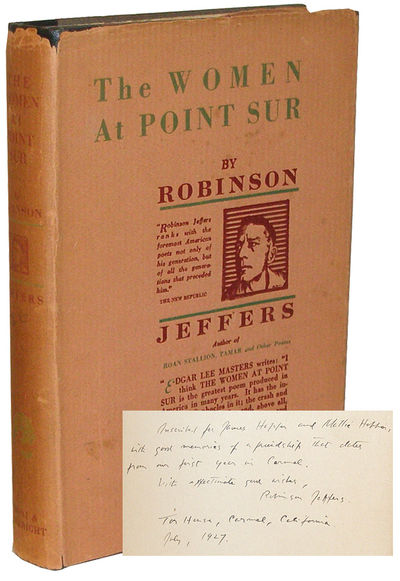 by Jeffers, Robinson
New York: Boni & Liveright, 1927 First edition, first printing. Inscribed by Jeffers to the front free endpaper: "Inscribed for James Hopper and Mattie Hopper, / with some memories of a friendship that dates / from our first year in Carmel. / With affectionate good wishes, / Robinson Jeffers. / Tor House, Carmel, California / July, 1927". Publisher's black cloth over purple boards, lettered in gilt; in the original salmon dust jacket, lettered in green and dark red. Near fine, with some light wear to the extremities, a hint of vertical creasing to the spine, a hint of spotting to the rear pastedown, otherwise bright and clean pages; unclipped dust jacket, with some wear and minor chipping to the extremities, short losses to the spine head and top corners, some toning to the spine, light rubbing to the hinges, a hint of spotting to the otherwise bright and clean panels, small hole to the top edge of the rare panel not affecting the lettering. A bright and pleasing copy. This copy is inscribed by Robinson Jeffers to his friend and fellow author James M. Hopper. Jeffers inscribed this volume at Tor House, the home he built for his family in Carmel-by-the-Sea in California and the location at which he wrote the majority of his novels. Both Jeffers and Hopper, along with their contemporaries George Sterling, Upton Sinclair, Sinclair Lewis, and Jack London, were part of the group of authors that helped establish Carmel as a literary and artistic refuge in Monterey County. Although neither was a native of California, both Jeffers and Hopper ultimately settled in Carmel. The Women at Point Sur is Jeffers' longest and most ambitious work - "a magnificent narrative almost as long as a novel, fully as interesting as any novel can be, and infinitely more stirring to the mind and senses than any prose." In addition to the titular poem, this volume contains a prologue, which is also written in poetic verse. Unlike many of his other works, The Women at Point Sur is laden with the philosophies of Friedrich Nietzsche.. Inscribed by Author. 1st Edition.. Hard Cover. Near Fine/Dust Jacket Included. (Inventory #: RJ003)
$850.00 add to cart or Buy Direct from
B & B Rare Books
Share this item