Gee! It's a Wonderful Game 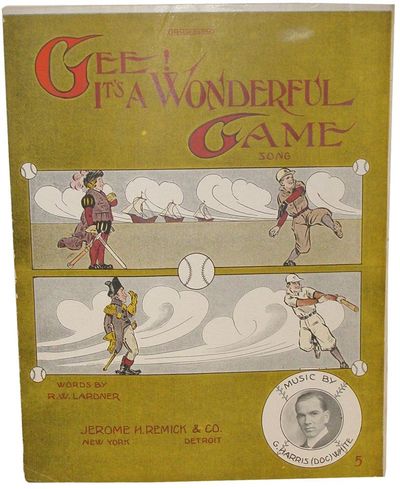 by Lardner, Ring; White; G. Harris (Doc)
Detroit: Jerome H. Remick & Co., 1911 Sheet music. First printing. Pictorial coated wove paper wrappers, with illustrations of baseball players Columbus and Napoleon to the front. A near fine copy, with some minor wear to the extremities, a hint of soiling to the rear wrapper, short split to the spine tail, bright and clean interior. Extremely rare in any condition; only six libraries worldwide list copies of this first edition of Lardner's second published sheet music, issued in an unknown print run. Bruccoli and Layman B2. Written shortly after the 1908 ditty "Take Me Out to the Ball Game" during a prosperous period for professional baseball, "Gee! It's a Wonderful Game!" is a song about the hypothetical reactions of Christopher Columbus and Napoleon to seeing American baseball for the first time. Ring Lardner, an American sports columnist best known for his satirical depictions of the sports world, composed the lyrics and G. Harris (Doc) White, a left-handed pitcher in Major League Baseball from 1901-1913 who dabbled in composition, wrote the waltz-time music. This score is published by Jerome H. Remick, an influential patron and early president of the Detroit Symphony. "Gee! It's a Wonderful Game" is laden with allusions to early 20th century baseball; as Richard Laymon notes in a 1981 article for The New York Times, "none of the fans, or bugs, as they were known, would have failed to recognize that the Christy mentioned in Lardner's song was Christopher (Big Six) Mathewson, also called Matty, the great right handed pitcher for John J. (Little Napoleon) McGraw's New York Giants, and that Christy had gone 27 and 9 in 1910." Although it was only performed once before a White Sox game in May 1911, Lardner had hoped "Gee! It's a Wonderful Game" would become an anthem for professional baseball.. 1st Edition.. Sheet Music. Near Fine. (Inventory #: RL027)
$200.00 add to cart or Buy Direct from
B & B Rare Books
Share this item