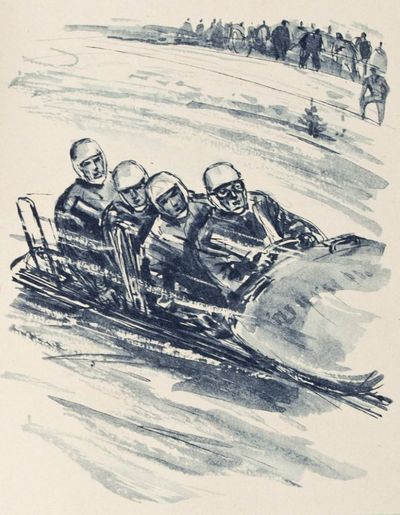 by Huhn, Klaus (Text); Hans Taege (Captions by); Gerhardt Heiß (Illustrations by)
Reichenbach i. V.: VEB Volkskunstverlag, 1956. First edition. Hardcover. g+. 64pp. Original half blue cloth over decorative paper covered boards. Published by VEB Volkskunstverlag, this photo-album is documenting in 100 striking b/w photographs, the athletes and the most memorable moments of the 1956 Cortina d'Ampezzo Winter Games known as the VIIth Olympiad.* Moderate shelf wear. Corners rubbed. Text and captions in German. Binding in overall good, interior in good+ to very good condition. * The 1956 Winter Olympics, officially known as the VII Olympic Winter Games, was a winter multi-sport event celebrated in Cortina d'Ampezzo, Italy. This celebration of the Games was held from 26 January to 5 February 1956. Cortina, which had originally been awarded the 1944 Winter Olympics, beat out Montreal, Colorado Springs and Lake Placid for the right to host the 1956 Games. The Cortina Games were unique in that many of the venues were within walking distance of each other. The organising committee received financial support from the Italian government for infrastructure improvements, but the rest of the costs for the Games had to be privately financed. Consequently the organising committee was the first to rely heavily on corporate sponsorship for funding. 32 nations - the largest number of participating Winter Olympic countries to that point - competed in the four sports and twenty-four events. The Soviet Union made its Winter Olympics debut and won more medals than any nation. Austrian Toni Sailer became the first person to sweep all three alpine skiing events in a single Olympics. The figure skating competition was held outdoors for the last time at these Games. Logistically, the only problem encountered was a lack of snow at the alpine skiing events. To remedy this, the Italian army transported large amounts of snow to ensure the courses were adequately covered. Politics did not impact the 1956 Winter Games as at the Summer Games in Melbourne, Australia, where the Soviet response to the Hungarian Uprising and the Suez War caused many nations to boycott the Games. The Cortina Olympics were the first Winter Olympics televised to a multi-national audience. Since Communist countries had superior technology, western European countries like Finland and a few isolated geographic areas of West Germany and Austria were only able to receive Communist broadcasts of the Games. This was perceived to be a significant win for the Soviets in the propaganda front of the Cold War, even though western Europe (including most of West Germany and Austria) was receiving the Eurovision broadcast signal. (Inventory #: 37690)
$250.00 add to cart or Buy Direct from
Eric Chaim Kline Bookseller
Share this item