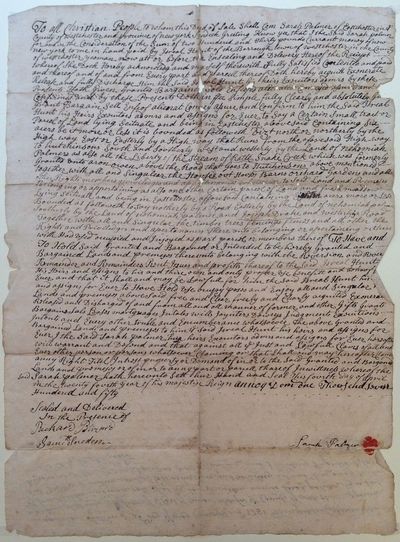 by NEW YORK CITY REAL ESTATE
Eastchester, 1750. unbound. 2 pages (front and back), 16.5 X 12 inches, Eastchester, County of Westchester [The Bronx], April 4, 1750. In this document, a woman named Sarah Pell Palmer sells a tract of land that will eventually become Co-op City, in part: "For the sum of two-hundred and thirty pounds current money paid by Israel Hunt, [Sarah Pell Palmer] assigns for ever a certain small tract of land, by the Highway that runs to Hutchinson's, southerly west and westerly by the land of Nehemiah Palmers, as also the liberty of the stream of Rattlesnake Creek, which was formerly granted onto Aaron Owen - above the road that goes to Hutchinson%u2019s, together with all the singular the houses, out house, barns, and orchard garden. Bounded as follweth: the northerly road easterly by the land of Nehemiah Palmer, southerly by the land of Nehemiah Palmer and Joseph Drake." In addition to being signed by Palmer, this document is signed by Samuel Sneden (an early Bronx land owner and Administrative official) and by Samuel Purdy (a sheriff, clerk, and colonial official). Weaknesses at the folds with occasional separations (as should be expected); otherwise very good condition. According to Bronx historian John McNamara, Anne Hutchinson's house was situated south of the Split Rock (a Bronx landmark), located at the intersection of the New England Thruway (I-95) and the Hutchinson River Parkway, near the border of the Bronx and Westchester County. Rattlesnake Creek is currently under landfill in Co-op City. The lands of Joseph Drake, though extensive, can be seen as being part of the Baychester section of the Bronx, west of Co-op City, probably encompassing Boston Road and extending up through Palmer Street. There is a Rattlesnake Creek that is dammed within the confines of Seton Falls Park, the Baychester section of the Bronx. This must be discounted as the geographical reference in the above deed because of its distance from the Anne Hutchinson estate. (Inventory #: 250236)
$1,800.00 add to cart or Buy Direct from
Argosy Book Store
Share this item