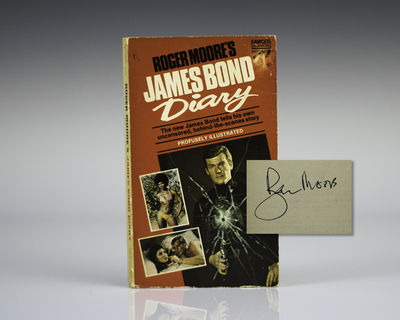 by Moore, Roger
Fawcett Publications, 1973. First edition of Moore's diary regarding the making of Live and Let Die. Octavo, original illustrated wrappers, illustrated. Signed by Roger Moore. In very good condition. Live and Let Die is a 1973 British spy film, the eighth in the James Bond series to be produced by Eon Productions, and the first to star Roger Moore as the fictional MI6 agent James Bond. Produced by Albert R. Broccoli and Harry Saltzman, it was the third of four Bond films to be directed by Guy Hamilton. Although the producers had wanted Sean Connery to return after his role in the previous Bond film Diamonds Are Forever, he declined, sparking a search for a new actor to play James Bond. Moore was signed for the lead role. The film is adapted from the novel of the same name by Ian Fleming. In the film, a Harlem drug lord known as Mr. Big plans to distribute two tons of heroin free to put rival drug barons out of the business and then become a monopoly supplier. Mr. Big is revealed to be the disguised alter ego of Dr. Kananga, a corrupt Caribbean dictator, who rules San Monique, the fictional island where the heroin poppies are secretly farmed. Bond is investigating the deaths of three British agents, leading him to Kananga, and is soon trapped in a world of gangsters and voodoo as he fights to put a stop to the drug baron's scheme. It was the first James Bond film featuring an African American Bond girl romantically involved with 007, Rosie Carver, who was played by Gloria Hendry. The film was a box office success and received generally positive reviews from critics. It was also nominated for the Academy Award for Best Original Song for "Live and Let Die", written by Paul and Linda McCartney and performed by their band Wings. (Inventory #: 3851)
$350.00 add to cart or Buy Direct from
Raptis Rare Books
Share this item